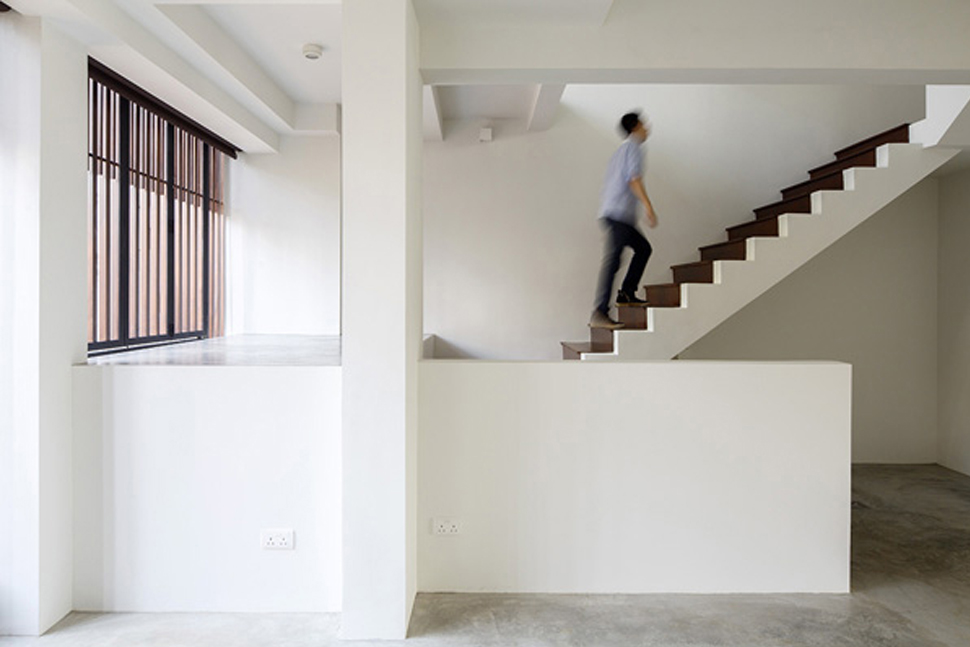 Founder of Brewin Design Office, Bobby Cheng, is intent on creating bespoke spatial experiences with attention to craft and strong ideation. Luo Jingmei has the story.

Brewin Design Office is a Singapore-based, multidisciplinary design studio established by Bobby Cheng in 2012. The five-man practice, whose portfolio includes showflats, art galleries and houses, is governed by a particularly fastidious attention to detail and conceptual rigour.

This approach is influenced by Cheng’s multifaceted educational and work experiences. He received his Bachelor of Architecture at Rhode Island School of Design and Master of Architecture in Urban Design at Harvard Graduate School of Design. Later, he trained under Calvin Tsao at NYC architecture firm Tsao & Mckown, where he developed a strong passion for the history of interior design as well as an interest in crafting furniture and industrial design. Some time at Atelier Jean Nouvel in Paris also exposed him to macro-scale projects in Singapore and Australia.

Rhode Island School of Design, Cheng shares, “set my base from approaching architecture through a lens that was always very conceptual, placing a high priority to view design as a form of art, and viewing sites as environments for the opportunity for installations.”

Some of these environments are the interiors of showflats. For instance, his Le Nouvel Ardmore project takes its cue from the building’s stark white architecture, and has different “rooms of coloured stones” inserted as a contrast against the white base. Then there’s the Kerry Hill-designed Hana Residences. Inspired by the building and architect’s repetitive screening language, it has “an aesthetic and construction methodology inspired by traditional Japanese interior design.”

These spaces are highly bespoke, where Cheng “explores blending custom furniture and millwork design with sourced furniture pieces, old and new, with both trying to resonate the style or period that the interior design is representing and also continue to push the boundary of crafting material.”

Design, for Cheng, is about “innovative programmatic and usage solution that transcend the conventions of categorical design”, as stated on his website. Thus, in a very renaissance way of working, there is no differentiation between architecture, interior design and even installation works – the same approach is taken for all.

In The Screened House, an existing massive structural beam across a new stair void reflects a layering of textures and time. The solution for a brief to fill a public space in the Arata Isosaki Conference Building in the CIPEA project in Nanjing with a permanent art installation-cum-usable space is “a necklace of linking partitions made of materials of varying translucencies and heights” to respond to the varying new programs and their corresponding spatial requirements. In the Fort Canning Pinacotheque Museum, which is slated to open mid-2015, a linear “Pipe” element that functions as a custom LED light fixture links programs across the different public spaces while bridging furniture, lighting, wayfinding, installation and branding. Here, Cheng tells us more about his influences and work.

How did your interest in architecture begin?

My father was a trained architect who started a property development company by the time I was 12. His professional and personal focus on design and architecture influenced my exposure to the field at a very young age [so] the decision for me to choose the path of a designer eventually was not surprising at all.

Your first project was The Fat Cow restaurant. How did the design respond to the architecture of the space?

I used a timber structural grid (that was eventually modelled and sent directly into a CNC machine for cutting) to compensate for the extra high ceilings of the ground level in Richard Meier’s Camden Medical building. The ceiling grid in the entry room was more cavernous, parts of the edges dropped into the walls to become shelving for the bar. In the main dining room, the ceiling grid is a symmetrical coffer element, to lower the ceiling around the bar to create a cosier dining experience.

You have designed a number of art galleries. How would you describe your approach to designing such spaces?

The results of these galleries differ as much as the client briefs and their respective site constraints. In Space Cottonseed in Gillman Barracks, we had a 100 square metre floor area to work with. I designed two non-symmetrical boxes with faceted semi-exposed ceilings created from timber beams. These volumes are placed in the space to create a prolonged journey around the floor space, creating new walls and sub-rooms.

In a concept design for a large space also at Gillman Barracks for the artist Takashi Murakami, we were asked to incorporate the design of a café, mass storage possibilities, and an existing large sliding window wall into the space, so we proposed a circulation tunnel that strung a series of ‘storage boxes’ among exhibition spaces that also connected directly to a large access point for the delivery of large works of art through the sliding wall.

Of the few galleries we’ve worked on, The Empty Gallery, a current space we’re completing construction for in Hong Kong, would be the most conceptual… it is based on the metaphysical concept of ‘emptiness’. The gallery is entirely black with no natural light except for one single window that frames the verdant green foliage on the side of a mountain. This allows a shaft of light to enter the foyer space that recedes into a black void once you enter the main exhibition room [to focus intensively on the art without spatial distractions].