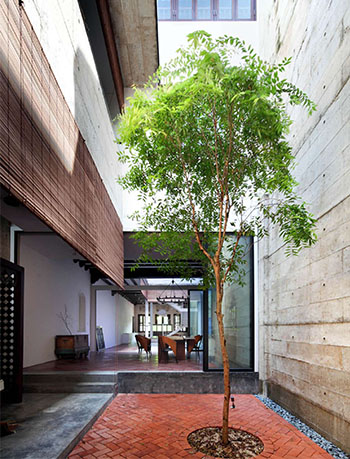 The Design Abode: On Meaningful Architecture

Founder of design consultancy The Design Abode Ewan Wong shares on his ideals for an architecture practice that goes back to basics. Luo Jingmei reports.

Founded in 2010, The Design Abode is a young design consultancy founded by Ewan Wong whose ethos is “to deliver honest and unpretentious spatial design unique to each user.” Ewan explains that means that “rather than superficial aesthetic treatments, we challenge ourselves to work out innovative spatial configurations and the creative use of materials and construction methods. That’s not to say we don’t employ ornate details or luxurious elements, but we evaluate its relevance according to the project’s context and the user’s need and budget.”

After graduating from the School of Architecture in the National University of Singapore (NUS), Ewan spent several years working under architect Sonny Chan of CSYA (Chan Sau Yan Associates). It was there where his philosophy toward the practice of architecture was formed.

“Working closely with Sonny Chan and the team at CSYA was most enriching. Sonny Chan is a true modernist and believer that form follows function; everything began with the plan. That formed the foundation of my design approach. While still considering the form, the functional need of the user is primary,” he explains. Additionally, CSYA’s direction pursuing “new ideas while guided by firm principles” rather than following a set style, resulting in a diverse aesthetic also influenced Ewan’s own body of work.

His projects, for instance, explore a range of issues: from multi-functional spaces (Marine Terrace Apartment) to merging heritage elements with modern programs (Neil Road Shophouse, which was designed in association with ONG&ONG). Meanwhile, in the HG Metal Office & Warehouse, he created a meaningful respite with a courtyard that slices though the building – “a great chance to bring creative solutions to a less glamorous industrial projects” – and in The Canopi, a 20-tent hotel in Bintan due for completion this year, he attempts to create an inspiring contextual design inspired by the charms of outback camps with a limited budget and timeframe. A concept proposal for Burmah Square in Penang explores commercial and hospitality programs in a high-density mixed-development model.

Like many young firms, his first project was his own home. After that was published, people came knocking on his doors looking for similar “economical solutions to compact spaces.” Two years ago, the firm was invited to pitch for a proposed hotel in Bintan called Treasure Bay, which is The Design Abode’s largest project to date. That led to the commissioning of further projects such as The Canopi. The firm is also working on the interior design and construction management of Mercure Ibis Budget Bintan.

Previously a one-man show, Ewan now runs The Design Abode together with Associate Daniel Wong and has two other full-time staff. Since 2012, he also does collaborations with Adrian Ong, founder of Local Chapter, a non-for-profit organisation with the focus of architecture as a social service. The Design Abode’s studio is set in a half-shop space in a quaint HDB estate in the fringe of the CBD with a casual interior set up. “The space is a reflection of the atypical ‘office’ culture of the studio; there’re no formal work hours and the team checks in for discussions and meetings, or to access resources. This gives them space to manage their time to engage in a holistic range of activities [outside of architecture] that enrich our design approach,” says Ewan. For instance, Daniel is a sought-after jazz trumpeter after work hours, and each of the other two staff dabble in theatre set design and work as a part-time barrister in a café respectively. “What’s most important is that deliverables are met, and everyone remains inspired and motivated,” says Ewan of his demands.

This multi-faceted approach to design – and to life – is important to Ewan, as he sees The Design Abode as a “design house – a collaborative where like-minded individuals come together on the basis of shared design values” rather then a design factory just churning out project after project. That’s one meaning behind the studio’s name, the other being its reference to the ‘abode’ (“the basic habitable unit”) reflecting the studio’s “back-to-basics approach in seeking fundamental solutions though design.”

That means regardless of the type of project – residential or hospitality – there is the same starting point. “We ask ourselves what’s meaningful for the user. When it comes to the user, the intimate scale for both residential and hospitality is similar. It comes down to the little details that bring comfort and convenience. Another similarity is the need to create a sense of place; a hotel is essentially a home away from home,” says Wong.

While it wasn’t planned, the hospitality genre appears to be the key direction the firm is heading towards. Aside from those mentioned, other hospitality projects now in the talks include a lower mid-range hotel chain in Malaysia and a hotel in a colonial building in Yangon. “We hope that projects like these will be useful in honing our design skills while enforcing our philosophy,” reflects Ewan.

And it’s not just commercially driven architecture projects he is interested in pursuing. “In time to come, we hope to also get the financial capacity to support Local Chapter, which aims to aide the marginalised within South East Asia who are either without homes or dwellings in sub-standard living conditions. This is where design becomes meaningful.”