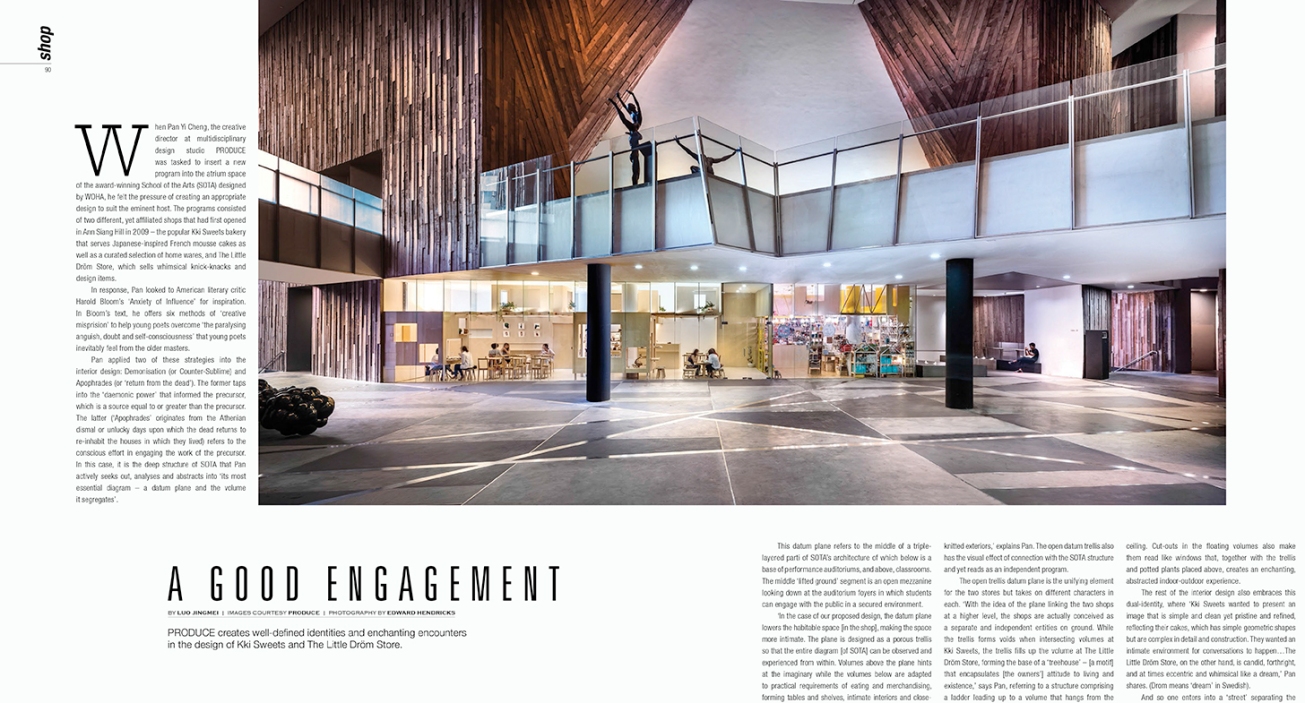 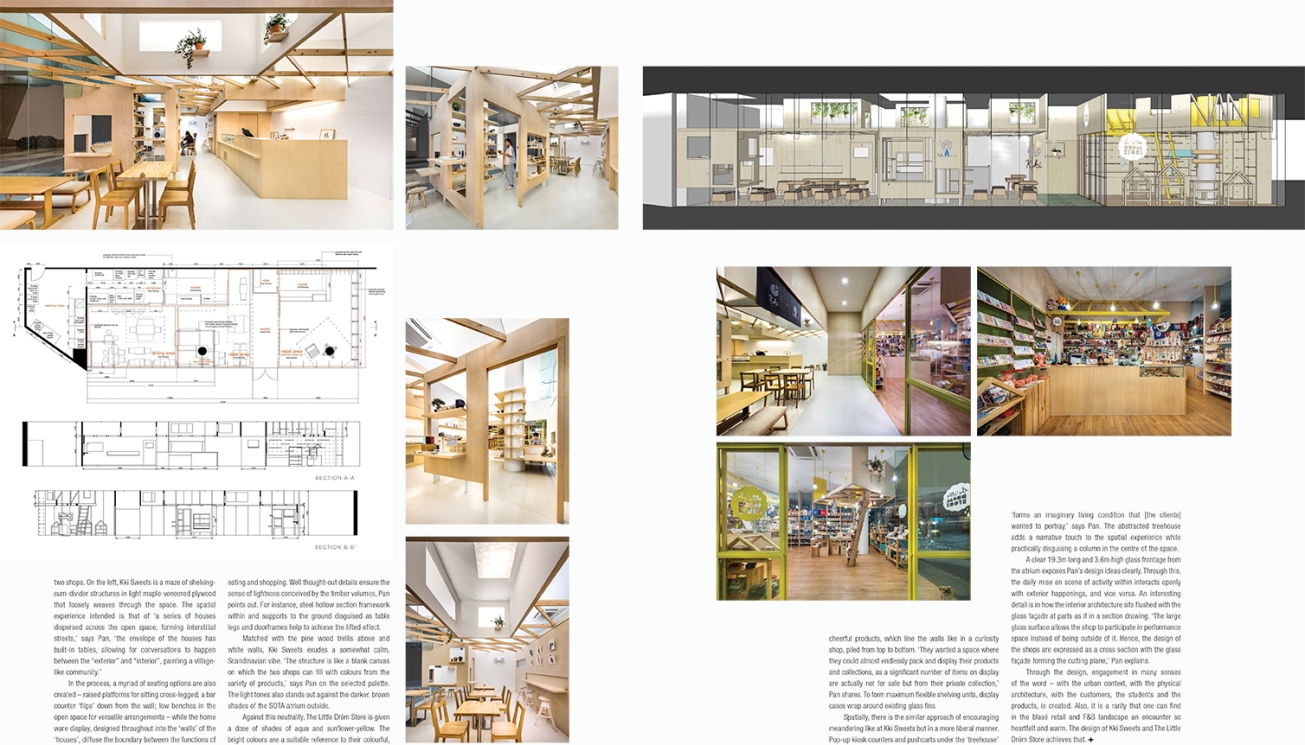 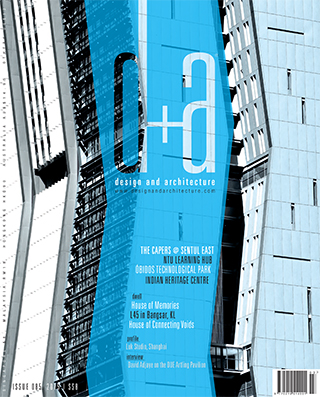 PRODUCE creates well-defined identities and enchanting encounters in the design of Kki Sweets and The Little Dröm Store.

When Pan Yi Cheng, the creative director at multidisciplinary design studio PRODUCE was tasked to insert a new program into the atrium space of the award-winning School of the Arts (SOTA) designed by WOHA, he felt the pressure of creating an appropriate design to suit the eminent host. The programs consisted of two different, yet affiliated shops that had first opened in Ann Siang Hill in 2009 – the popular Kki Sweets bakery that serves Japanese-inspired French mousse cakes as well as a curated selection of home wares, and The Little Dröm Store, which sells whimsical knick-knacks and design items.

Pan applied two of these strategies into the interior design: Demonisation (or Counter-Sublime) and Apophrades (or “return from the dead”). The former taps into the “daemonic power” that informed the precursor, which is a source equal to or greater than the precursor. The latter (‘Apophrades’ originates from the Athenian dismal or unlucky days upon which the dead returns to re-inhibit the houses in which they live) refers to the conscious effort in engaging the work of the precursor. In this case, it is the deep structure of SOTA that Pan actively seeks out, analyses and abstracts into “it’s most essential diagram – a datum plane and the volume it segregates”.

This datum plane refers to the middle of a trip-layered parti of SOTA’s architecture of which below is a base of performance auditoriums, and above, classrooms. The middle “lifted ground” segment is an open mezzanine looking down at the auditorium foyers in which students can engage with the public in a secured environment.

“In the case of our proposed design, the datum plane lowers the habitable space [in the shop], making the space more intimate. The plane is designed as a porous trellis so that the entire diagram [of SOTA] can be observed and experienced from within. Volumes above the plane hints at the imaginary while the volumes below are adapted to practical requirements of eating and merchandising, forming tables and shelves, intimate interiors and close-knitted exteriors,” explains Pan. The open datum trellis also has the visual effect of connection with the SOTA structure and yet reads as an independent program.

The open trellis datum plane is the unifying element for the two stores but takes on different characters in each. “With the idea of the plane linking the two shops at a higher level, the shops are actually conceived as a separate and independent entities on ground. While the trellis forms voids when intersecting volumes at Kki Sweets, the trellis fills up the volume at The Little Dröm Store, forming the base of a ‘treehouse’ – [a motif] that encapsulates [the owners’] attitude to living and existence,” says Pan, referring to a structure comprising a ladder leading up to a volume that hangs from the ceiling. Cut outs in the floating volumes also make them read like windows that, together with the trellis and potted plants placed above, creates an enchanting, abstracted indoor-outdoor experience.

The rest of the interior design also embraces this dual-identity, where “Kki Sweets wanted to present an image that is simple and clean yet pristine and refined, reflecting their cakes, which has simple geometric shapes but are complex in detail and construction. They wanted an intimate environment for conversations to happen…The Little Dröm Store, on the other hand, is candid, forthright, and at times eccentric and whimsical like a dream,” Pan shares. (Drom means ‘dream’ in Swedish).

And so one enters into a “street” separating the two shops. On the left, Kki Sweets is a maze of shelving-cum-divider structures in light maple-veneered plywood that loosely weaves through the space. The spatial experience intended is that of “a series of houses dispersed across the open space, forming interstitial streets,” says Pan, “the envelope of the houses has built-in tables, allowing for conversations to happen between the ‘exterior’ and ‘interior’, painting a village-like community”.

In the process, a myriad of seating options are also created – raised platforms for sitting cross-legged; a bar counter ‘flips’ down from the wall; low benches in the open space for versatile arrangements – while the home ware display, designed throughout into the ‘walls’ of the ‘houses’, diffuse the boundary between the functions of eating and shopping. Well thought-out details ensure the sense of lightness conceived by the timber volumes, Pan points out. For instance, steel hollow section framework within and supports to the ground disguised as table legs and doorframes help to achieve the lifted effect.

Matched with the pine wood trellis above and white walls, Kki Sweets exudes a somewhat calm, Scandinavian vibe. “The structure is like a blank canvas on which the two shops can fill with colours from the variety of products,” says Pan on the selected palette. The light tones also stands out against the darker, brown shades of the SOTA atrium outside.

Against this neutrality, The Little Dröm Store is given a dose of shades of aqua and sunflower-yellow. The bright colours are a suitable reference to their colourful, cheerful products, which line the walls like in a curiosity shop, piled from top to bottom. “They wanted a space where they could almost endlessly pack and display their products and collections, as a significant number of items on display are actually not for sale but from their private collection,” Pan shares. To form maximum flexible shelving units, display cases wrap around existing glass fins.

Spatially, there is the similar approach of encouraging meandering like at Kki Sweets but in a more liberal manner. Pop-up kiosk counters and pushcarts under the ‘treehouse’ “forms an imaginary living condition that [the clients] wanted to portray,” says Pan. The abstracted treehouse adds a narrative touch to the spatial experience while practically disguising a column in the centre of the space.

A clear 19.3metre-long and 3.6metre-high glass frontage from the atrium exposes Pan’s design ideas clearly. Through this, the daily mise en scene of activity within interacts openly with exterior happenings, and vice versa. An interesting detail is in how the interior architecture sits flushed with the glass façade at parts as if in a section drawing. “The large glass surface allows the shop to participate in performance space instead of being outside of it. Hence, the design of the shops are expressed as a cross section with the glass façade forming the cutting plane,” Pan explains.

Through the design, engagement in many senses of the word – with the urban context, with the physical architecture, with the customers, the students and the products, is created. Also, it is a rarity that one can find in the blasé retail and F&B landscape an encounter so heartfelt and warm. The design of Kki Sweets and The Little Dröm Store achieves that.