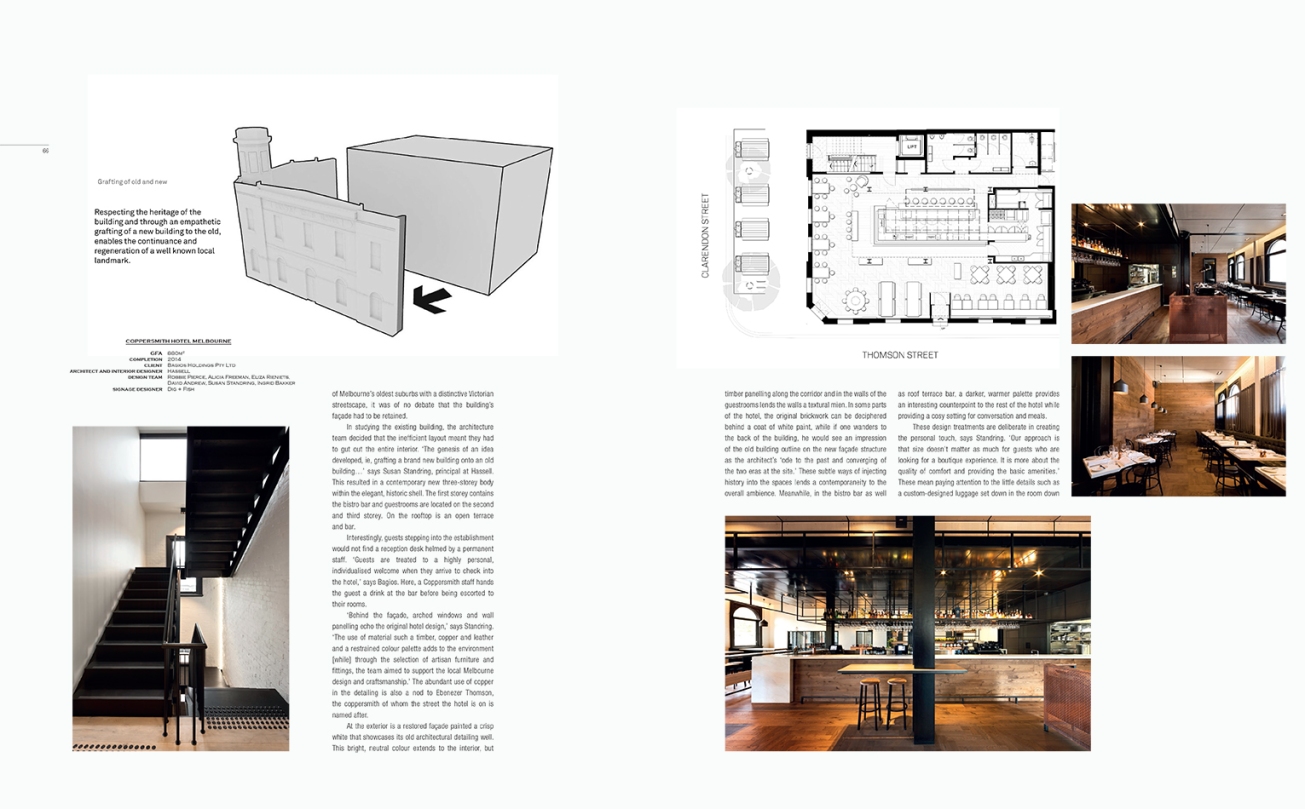 The design of the Coppersmith Hotel by Hassell melds history and contemporaneity to present a textural and authentic experience for guests.

Australian-based architecture studio Hassell is better known for their large-scale works worldwide that include China’s Alibaba Headquarters, Melbourne’s ANZ Centre as well as a host of other healthcare, workplace and educational projects. The Coppersmith Hotel is thus an anomaly for its boutique size, but it is a project that they are more than happy to engage in for a chance to breathe new life into a historic establishment and also work with an open and design-centric client.

The hotel on South Melbourne’s Clarendon Street had a former life as the Cricket Club Hotel, which was built in 1870. The client, George Bagios of Bargios Holdings, an owner and operator of hospitality establishments in Victoria and Western Australia, had purchased the building in 2005 with the idea of creating “a classic small 15-room hotel, a neighbourhood hangout [that is] part of the local lifestyle [and] community, whilst offering the very best in service with experienced and engaging staff.”

Of utmost importance was the building’s history. “We wanted to respect and maintain the heritage of the building, which was a well-known South Melbourne landmark that has served the local community for over one hundred and fifty years,” says Bagios. Located in one of Melbourne’s oldest suburbs with a distinctive Victorian streetscape, it was of no debate that the building’s façade had to be retained.

In studying the existing building, the architecture team decided that the inefficient layout meant they had to gut out the entire interior. “The genesis of an idea developed, i.e.: grafting a brand new building onto an old building…” says Susan Standring, principal at Hassell. This resulted in a contemporary new three-storey body within the elegant, historic shell. The first storey contains the bistro bar and guestrooms are located on the second and third storey. On the rooftop is an open terrace and bar.

Interestingly, guests stepping into the establishment would not find a reception desk helmed by a permanent staff. “Guests are treated to a highly personal, individualised welcome when they arrive to check into the hotel,” says Bagios. Here, a Coppersmith staff hands the guest a drink at the bar before being escorted to their rooms.

“Behind the façade, arched windows and wall panelling echo the original hotel design,” says Standring. “The use of material such a timber, copper and leather and a restrained colour palette adds to the environment [while] through the selection of artisan furniture and fittings, the team aimed to support the local Melbourne design and craftsmanship.” The abundant use of copper in the detailing is also a nod to Ebenezer Thomson, the coppersmith of whom the street the hotel is on is named after.

At the exterior is a restored façade painted a crisp white that showcases its old architectural detailing well. This bright, neutral colour extends to the interior, but timber panelling along the corridor and in the walls of the guestrooms lends the walls a textural mien. In some parts of the hotel, the original brickwork can be deciphered behind a coat of white paint, while if one wanders to the back of the building, he would see an impression of the old building outline on the new façade structure as the architect’s “ode to the past and converging of the two eras at the site.” These subtle ways of injecting history into the spaces lends a contemporaneity to the overall ambience. Meanwhile, in the bistro bar as well as roof terrace bar, a darker, warmer palette provides an interesting counterpoint to the rest of the hotel while providing a cosy setting for conversation and meals.

These design treatments are deliberate in creating the personal touch, says xx. “Our approach is that size doesn’t matter as much for guests who are looking for a boutique experience. It is more about the quality of comfort and providing the basic amenities,” Standring says. These mean paying attention to the little details such as a custom-designed luggage set down in the room down to the towel quality. A key aspect is in designing cleverly for a compact space without compromising on quality experience. For this, says Standring, everything has been specially designed. An example is how the ironing board is kept away under the bed. “Contrast and surprise is part of the experience. [Another instance is in] the yellow interiors of the wardrobe [that] makes [guests] smile upon opening the unit in an otherwise serene, [neutral] aesthetic,” adds xx.

Another aspect of the hotel’s bespoke character is in the tactility. “The handles on the doors and drawers are leather for a soft touch, and we used copper pipe inserts on the drawers as pulls, providing subtle highlights within the standalone joiner pieces,” Standring points out. These elements all help to create a homely appeal, she adds, as do the carpet and standalone furniture in the guestrooms, the timber wall panelling. “[Additionally], the soft luxury of the linen curtains across the entire width of the room, even in the bathrooms, add romanticism to the spaces. There’s a balance of masculine and feminine appeal,” she highlights.

As with the rest of the hotel, the bathrooms are designed with a throwback to the past but applied in a modern way: in the bathroom door framing and shelving in waxed, blackened steel, wire mesh frosted glass for the bathroom doors that also help to illuminate the space more; and circular mosaics in the shower stalls.

Aside from the aesthetic, functionality is well considered throughout the hotel. A good example is in the design of the bistro bar. “We created a diversity of spaces to suit the different needs of guests at different times of the day. When you walk through the door, you see the various seating straight away and know where you are in the space, creating an immediate sense of ease,” Standring explains. “From an operational perspective, the spaces in the Coppersmith Hotel are designed to work hard, while maximising comfort and atmosphere for the patrons,” she affirms.

For instance, the bar and kitchen positioned in the centre of the space minimise the travel distance of staff while the openness of the bar and bistro means staff can see the whole area regardless of where they are in the space,” Standring highlights. Melding function and aesthetic has resulted in unique details that lend character to the interior, such as the different timber floor layouts – linear, herringbone, chequerboard – demarcating the different seating types. “They merge together ‘escher-esque-inspired,” says Standring. Above the bar, the overhead shelving is designed to be a piece of functional sculpture, while the bar counter’s foot rail continues across the floor and morphs into a joinery display unit.

Around the hotel, guests are also privy to glimpses of the quaint neighbourhood through openings of the original shell. Says Standring, “the location of the stair up to the guestroom levels was strategically located to work within the rhythm of the existing façade windows, thereby maximising natural daylight into the space. Similarly, the spectacular view of the city from the rooftop terrace is framed within a horizontal aperture, creating a postcard image of the Melbourne skyline.” These gestures are in line with the client’s desire to connect the hotel with its immediate context.

At the Coppersmith Hotel, authenticity is the winning formula – authenticity to heritage, authenticity in understanding the needs of the modern traveller and authenticity of good, honest design. This has resulted in a delightful, rich and sensual experience for guests that unravel in a narrative manner of discovery.