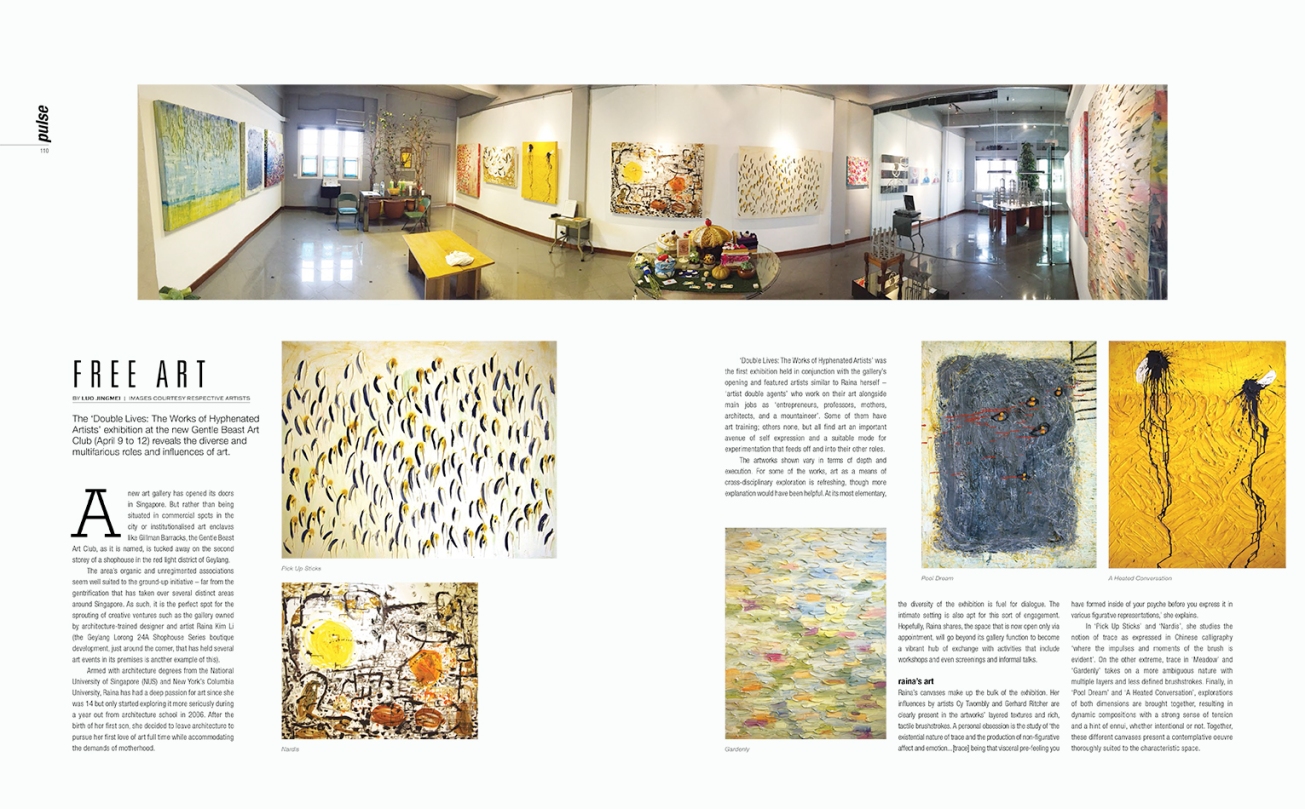 The ‘Double Lives: The Works of Hyphenated Artists’ exhibition at the new Gentle Beast Art Club reveals the diverse and multifarious roles and influences of art.

From 9 to 12 April 2015, a new art gallery opened its doors in Singapore. But rather than being situated in commercial spots in the city or institutionalised art enclaves like Gillman Barracks, the Gentle Beast Art Club, as it is named, is tucked away on the second storey of a shophouse in the red light district of Geylang.

The area’s organic and unregimented associations seem well suited to the ground up initiative – far from the gentrification that has taken over several distinct areas around Singapore. As such, it is the perfect spot for the sprouting of creative ventures such as the gallery owned by architecture-trained designer and artist Raina Kim Li (the Geylang Lorong 24A Shophouse Series boutique development that has held several art events in its premises just around the corner is another example of this).

Armed with architecture degrees from the National University of Singapore (NUS) and New York’s Columbia University, Raina has had a deep passion for art since she was 14 but only started exploring it more seriously during a year out from architecture school in 2006. After the birth of her first son, she decided to leave architecture to pursue her first love of art full time while accommodating the demands of motherhood.

‘Double Lives: The Works of Hyphenated Artists’ was the first exhibition held in conjunction with the gallery’s opening and featured artists similar to Raina herself – “artist double agents” who work on their art alongside main jobs as “entrepreneurs, professors, mothers, architects, and a mountaineer”. Some of them have art training; others none, but all find art an important avenue of self expression and a suitable mode for experimentation that feeds off and into their other roles.

Raina’s canvases make up the bulk of the exhibition. Her influences by artists Cy Twombly and Gerhard Ritcher are clearly present in the artworks’ layered textures and rich, tactile brushstrokes. A personal obsession is the study of “the existential nature of trace and the production of non-figurative affect and emotion…[trace] being ‘that visceral pre-feeling you have formed inside of your psyche before you express it in various figurative representations,” she explains.

In ‘Pick Up Sticks’ and ‘Nardis’, she studies the notion of trace as expressed in Chinese calligraphy “where the impulses and moments of the brush is evident”. On the other extreme, trace in ‘Meadow’ and ‘Gardenly’ takes on a more ambiguous nature with multiple layers and less defined brushstrokes. Finally, in ‘Pool Dream’ and ‘A Heated Conversation’, explorations of both dimensions are brought together, resulting in dynamic compositions with a strong sense of tension and a hint of ennui, whether intentional or not. Together, these different canvases present a contemplative oeuvre thoroughly suited to the characteristic space.

In contrast to this intellectual body of work is Esther’s displays of exuberant colours and movement led by a more sentimental and also joie de vivre spirit. Esther was trained in fine art but spent ten years as a copywriter with Ogilvy before devoting five years in a journey to climb Mt. Everest with the Singapore Women’s Everest Team. Like Raina, she is now a stay-at-home mother who devotes portions of time to art.

Esther’s art is segmented according to seasons in her life. “When I was married, that’s when Spring began [for me]. And this series is a continuation of Spring, hence the vibrant colours and dancing brushstrokes,” she shares. Her choice of acrylic as a medium that is easy to use and dries fast is suited to this approach. “It is easier and faster to layer with and I like how the urgency shows in the strokes…I like to portray energy in the brushstrokes I use; it helps to accentuate the colours I use,” she shares.

The exhibition also features the artwork of the two founders of young design studio OWMF Architecture. Tan Sy Lyng’s artwork, plastered against the window with light streaming though, features repetitive lines on rice paper. Deceptively simple, they belie Sy Lyng’s more complex fascinations with the works of American conceptual artist Sol Lewitt, in particular his famous Drawing Series – a system of squares containing straight lines in four directions and which were later applied to actual walls that invited completion by the hands of others.

Sy Lyng explores this system via the eastern style of Chinese calligraphy, ‘completing’ the system with brush and ink on rice paper rather than Lewitt’s method of hard pencil on solid walls. “I thought calligraphy is a unique eastern art form that is in between drawing and text. I wanted to learn how to use the brush after years of drawing and drafting with definite hard pens and pencils. I was intrigued by the infinite variations in the strokes, lightness of the rice paper, asymmetrical balance of the strokes and structures of the characters, emphasis on void/space between the strokes and words, fluidity and dynamic flow of the overall structure,” she explains.

Sy Lyg has been learning calligraphy since 2013 as a reaction to her more western-oriented architecture education at NUS, Cooper Union and The École Spéciale d’Architecture. “The discovery has certainly changed my view and approach towards architecture. I was more focused on the object, the formalistic approach before. Now it is equally important for me to pursue the void and create new spaces,” she says. Her current interest in the new dynamic, fluid and nomadic spaces created by architects such as SANAA and Junya Ishigami reflect this fascination.

For her partner at OWMF Architecture, Tay Yew, art is a medium that allows him to explore ideas that the more “pedantic” discipline of architecture disallows. His concrete Gaudi-esque sculptures at the exhibition explore the order of things and growth, both natural and manmade, such as the steeples of Scotland, skeleton vertebrates and echinoderms, shares Yew, who studied architecture at NUS and Glasgow School of Art.

The last exhibitor is the folly store, a local interdisciplinary design studio helmed by Fann Zhi Jian, an educator at Singapore Polytechnic who shows two different sets of work here: a series of portraits entitled ‘Jay Gone Missing’ inspired by a punk in SOHO Starbucks in New York, with various permutations of this muse as influenced by modern culture and music; and INTER I PLAIN, a continuation of an earlier series that explores the notion of landscapes through the density of dots to create “multiple perspectives and view points and perspectives.” Travel is a key influence of Zhi Jian’s artwork, which is juxtaposed with his personal passions of music, pop culture, fashion and the retail landscape.

The artworks shown at the Double Lives vary in terms of depth and execution. For some of the works, art as a means of cross-disciplinary exploration is refreshing, though more explanation would have been helpful. At its most elementary, the diversity of the exhibition is fuel for dialogue. The intimate setting is also apt for this sort of engagement. Hopefully, Raina shares, the space that is now open only via appointment, will go beyond its gallery function to become a vibrant hub of exchange with activities that include workshops and even screenings and informal talks.