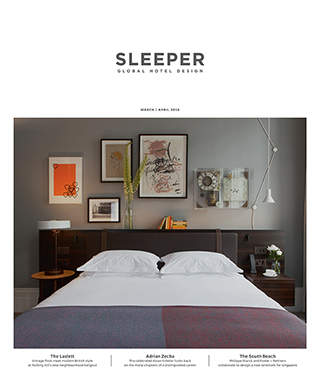 From the vestiges of a disused military site in the heart of Singapore’s cultural district arises The South Beach, a playful yet sophisticated hotel inspired by its tropical, cosmopolitan locale.

The South Beach, which sits in the heart of Singapore’s cultural district, has attracted much curiosity for its peculiar eclecticism. The 3.5-hectare mixed-used development comprises two ultramodern, inclined glass towers nestled within a cluster of low-rise structures – four whitewashed, concrete heritage buildings interwoven with several glass blocks – sheltered by a willowy canopy of steel and sand-coloured aluminium. One tower contains offices, and the other, The South Beach hotel and residences. Retail, F&B and hotel functions are spread throughout the lower buildings.

The project’s collaborators are an equally interestingly dichotic mix: the master-planning, architecture and façade design are by London’s Foster + Partners – renowned for its clear, precise architectural language – while the hotel’s interiors are adorned by Philippe Starck, whose love of whimsical and delightful forms, translated into iconic interiors and products, is world famous. The Singapore office of Aedas was the local architecture firm.

“We consider The South Beach development to be a natural extension of the adjacent historic district, with the hotel playing a key part in the revitalisation of the area. One of the key success stories of the project is the transformation of a formerly inaccessible site into a public space, with a ground plane that is entirely open,” says Roland Schnizer, Partner at Foster + Partners. The site had sat disused for many years. Three of the heritage buildings were formerly the headquarters for Singapore’s military forces, while the fourth was the well-patronised South Beach Club for army, naval and air force offices. These buildings were granted conservation status in 2000.

The new South Beach couldn’t be a more different hotel than its immediate neighbour – the iconic grand dame Raffles Hotel – with its gleaming blue-glass facade matched by the high-tech canopies that shelter guests at the hotel drop-off from Singapore’s harsh sun and perennial rains. Stepping inside, guests are transported into Starck’s highly textural, colourful and visually stimulating cosmos. This experience is heralded by Korean artist Lee Nam Nam’s gargantuan video art ‘Transformation’ just past the entrance – a floor-to-ceiling-high cinematic collage of moving shapes and shades.

In the hotel lobby, Starck eschews the sterile, monolithic check-in counter for seven individualised check-in tables. These highly decorative pieces are encased literally in glass boxes, backed by matching cabinets and topped by lavish chandeliers. Each is inspired by a different culture (European, Peranakan, North American, South American, Indian, Chinese, Moorish), reflecting Starck’s vision of a “Global Village” for this introductory point. The potpourri of cultural references is accompanied by a backdrop weaving together old and new, raw and refined – as inspired by the site itself – where elaborate elements sit within a shell of dusty grey cement walls and floors. A generous provision of plush sofas, each finished differently from the other, as well as a large communal table for guests to use their laptops on, provide a distinctly homely feel. Spaces such as these are designed as “Imaginative Social Spaces” that allow guests to be ‘alone together’ in the community of travellers, points out Koh Say Wee, Senior Manager, Projects, at South Beach Consortium Pte Lte.

Throughout, highly detailed and engaging experiences dictate the hotel’s public spaces, always involving the guest in dialogue. The lifts, for example, are installed with special RGB wallpaper depicting aquatic imagery; through the use of optical illusions, different graphics appear with the light change, resulting in a visually interactive vertical journey. At one of the hotel’s two sky gardens, Flow18, guests are not only privy to an impressive 360-degree view of the surroundings, Starck-designed graphics, such as a man jumping off a diving board and another of a gymnast in mid-air, reflect the recreational intent of the space in a poetic manner, highlights Koh. Juxtaposed with the French designer’s playful, exaggerated sense of scale – oversized lamps above the infinity pool, for instance – an Alice-in-Wonderland-type escape for guests is created, with doses of delight and wonder at every turn.

Where the public spaces are designed to inspire, stimulate and also encourage conversation, the guestrooms, on the contrary, are designed for pure rest. There are three room and three suite categories. All are oases of calm, awashed in soothing neutral tones and furnished by Starck-designed furniture and sanitary ware that remind guests of the designer’s touch.

Koh highlights that the rooms’ name, with the prefix ‘Showcase’ come from the multiple mirrored surfaces within (the attentive guest will also notice this leitmotif echoed throughout the public spaces too). Unique offerings include butler cabinets where guests can retrieve requested items at their own time and convenience, as well as 80 women-only Showcase Her rooms located across three stories that provide additional security and female amenities. For all rooms, a hybrid operating systems means guests can choose to switch on the lights manually, with the room control unit or via the television’s remote control.

The South Beach features four F&B offerings: Prefix is a cosy lobby lounge decked in wood, fabric, fur and mirrored elements; ADHD (All Day Hotel Dining) is also the acronym for the medical condition Attention-Deficit-Hyperactivity Disorder, but the restaurant’s name is really meant to evoke its dynamic mood, created with red and orange accents and an array of eclectic decorative elements; Laugh is a gastro-bar with jovial and inspiring quotes scribbled across the surfaces; and Court Martial Bar, whose name references the site’s heritage, is housed in one of the conserved buildings.

Housed in another conserved building – the former military Drill Hall – the ballroom, is one of the hotel’s most dynamic spaces. Within, Starck has created a ‘Forest of Lights’, with 11,520 LED mirrored light tubes hanging from the domed ceiling that are reminiscent of stalactites. A new mezzanine level at the back of the hall provides additional seating as well as a different vantage point to admire both old and new design features.

Apart from design, the hotel has plenty of eco-friendly features, such as solar thermal tubes that provide hot water for the hotel’s swimming pool and 2,500 square feet of photovoltaic panels that channel enough energy to power the entire development’s exterior feature lighting; a sun-shading skin on the building also reduces heat and glare into the interior while sky gardens punctuate the building’s profile. Behind its sexy, cosmopolitan identity, The South Beach’s design is also admirable in the way it seriously considers the unseen, but important issues of upkeep and usability.