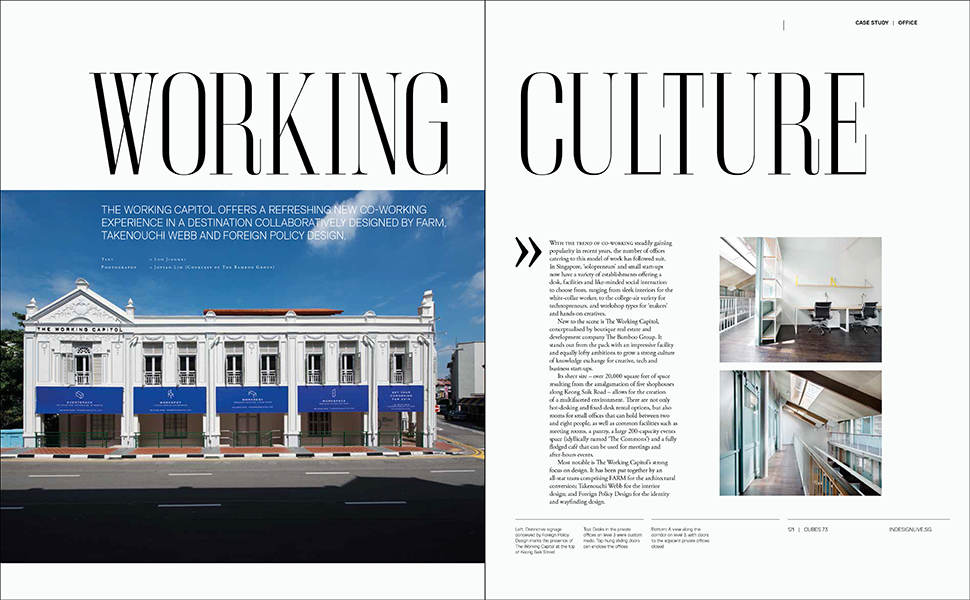 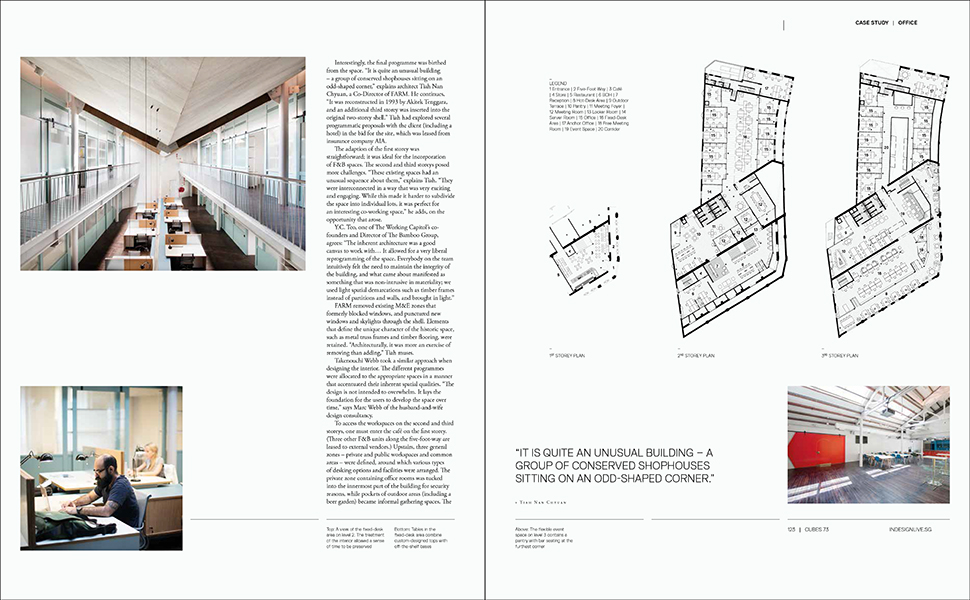 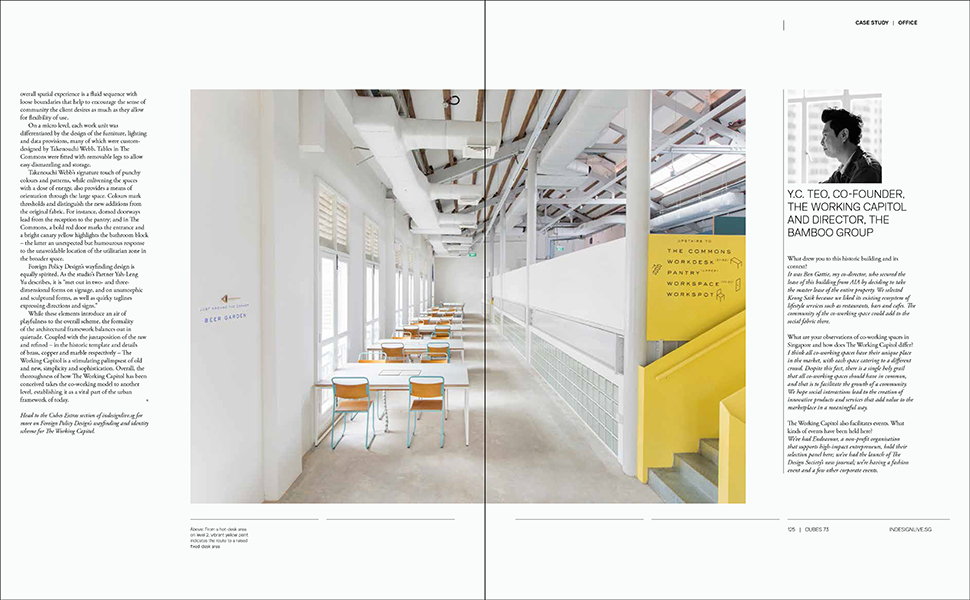 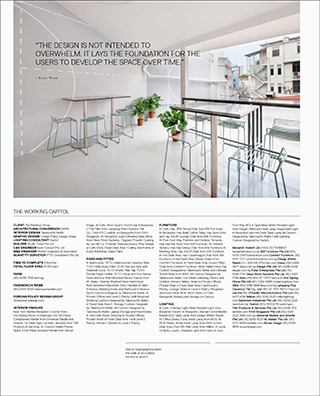 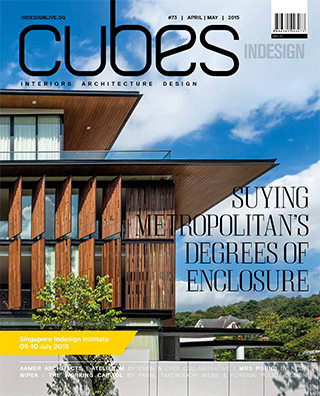 With the trend of co-working steadily gaining popularity in recent years, the number of offices catering to this model of work has followed suit. In Singapore, ‘solopreneurs’ and small start-ups now have a variety of establishments offering a desk, facilities and like-minded social interaction to choose from, ranging from sleek interiors for the white-collar worker, the college-air variety for technopreneurs, and workshop types for ‘makers’ and the hands-on creative.

New to the scene is The Working Capitol, conceptualised by boutique real estate and development company The Bamboo Group. It stands out from the pack with an impressive facility and equally lofty ambitions to grow a strong culture of knowledge exchange for creative, tech and business start-ups.

Its sheer size – over 20,000 square feet of space amalgamated from five shophouses along Keong Saik Road – allows for the creation of a multifaceted environment. There are not only hot-desking and fixed-desk rental options, but also rooms for small offices that can hold between two to eight people aside from common facilities such as meeting rooms, a pantry, a large 200-capacity events space (idyllically named ‘The Commons’) and a full-fledged café for users to hold meetings and after-office-hour events.

Most notable is The Working Capitol’s strong focus on design. It is put together by an all-star team comprising FARM for the architecture; Takenouchi Webb for the interior design; and Foreign Policy Design for the identity and wayfinding design.

Interestingly, the final program was birthed from the space. “It is quite an unusual building – a group of conserved shophouses sitting on an odd-shaped corner, reconstructed in 1993 by Akitek Tenggara where an additional third storey was magically inserted into the original two-storey shell,” explains Tan Nan Chyuan, a director and architect at FARM. He had explored with the client several programmatic proposals, including a hotel, in the bid for the site that was leased from AIA.

While the first storey was straightforward and ideal for the incorporation of F&B spaces, the second and third storey posed more issues. “These existing spaces had a strange sequence about them; they were interconnected in a way that was very exciting and engaging. While this made it harder to subdivide the space into individual lots, it was perfect for an interesting co-work space,” says Tan on the opportunity that arose.

Agrees Y.C. Teo, one of the directors of The Working Capitol and of The Bamboo Group, “The inherent architecture was of a good canvas to work with…collapsed walls in its existing condition allowed for a very liberal reprogramming of the space. Everybody on the team intuitively felt the need to maintain the integrity of the building, and what came about manifested as something that was non-intrusive in materiality; the use of light spatial demarcation such as timber frames instead of partitions and walls, and the bringing in of light.”

To achieve this, FARM removed existing M&E spaces that formerly blocked windows, and punctured new windows and skylights though the shell. Elements that define the unique character of the historic space, such as metal truss frames and timber flooring, were also retained. “Architecturally, it was more of an exercise in removing than adding,” Tan muses.

Takenouchi Webb took on a similar approach in designing the interior. The different programs were allocated to the appropriate spaces in a manner that accentuated their inherent spatial qualities. “The design is not intended to overwhelm and lays the foundation for the users to develop the space over time,” says Marc Webb of the husband-and-wife design consultancy.

To access the workspaces on the second and third storeys, one has to enter the café on the first storey (three other F&B units along the five-foot-way are leased to external vendors). Upstairs, three general zones – private and public workspaces and common services – were defined, around which various types of desking options and facilities were arranged. The private zone containing office rooms were tucked in the innermost parts of the building for security issues, while pockets of outdoor areas became informal gathering spaces, including a beer garden. The overall spatial experience is a fluid sequence with loose boundaries that help to encourage the sense of community the client desires as much as they allow for flexibility of use.

On a micro level, each work unit was differentiated by the design of the furniture, lighting and data provisions, many of which were custom-designed by Takenouchi Webb; tables in The Commons were also fitted with removable legs to be easily dismantled and kept away when events are being held.

Takenouchi Webb’s signature touch of punchy colours and patterns, while enlivening the spaces with a dose of energy, also functions as orientating elements through the large space, markers of thresholds and to distinguish the new additions from the original fabric. For instance, domed doorways lead from the reception to the pantry; in The Commons, a bold red door marks the entrance and a bright canary yellow highlights the toilet block – the latter an unexpected but humourous response to the unavoidable location of the utilitarian service in the space. Foreign Policy Design’s wayfinding design, “met out in two- and three-dimensional forms on signage and anamorphic and sculptural forms as well as quirky taglines expressing directions and signs,” as the firm’s co-partner Yah-Leng Yu describes, is equally spirited.

While these elements introduce a playfulness to the overall scheme, the formality of the architectural framework balances out in quietude. Coupled with the juxtaposition of the raw and refined – in the historic template and details of brass, copper and marble respectively – The Working Capitol is a stimulating palimpsest of old and new, simplicity and sophistication. Overall, the thoroughness of how The Working Capitol has been conceived takes the co-working model to another level, establishing it as an vital part of the urban framework of today.

Log on to Cubes Extras on www.indesignlive.sg for more on the wayfinding and identity design of The Working Capitol by Foreign Policy Design.

Q&A with Y.C. Teo, Director at The Working Capitol and The Bamboo Group

What drew you to this historic building and its context?

It was Ben Gattie, my co-director, who scored this building from AIA (the landlords) by deciding to take the master lease of the entire property. We picked Keong Saik because we liked how there is an existing ecosystem of lifestyle services there such as restaurants, bars and cafes. The idea of having a community from a co-working space could value add the social fabric there. It is also easily accessible by all forms of public transport.

What is your observation of current co-working space in Singapore and how does The Working Capitol differ?

I think all co-working spaces have their unique place in the market, with each space catering to different crowds. Despite this fact, there is a single holy grail that all co-working spaces should have in common, and that is to facilitate the growth of a community. We hope these interactions [in The Working Capitol] lead to the creation of innovative products and services that value add to the marketplace in a meaningful way.

The Working Capitol also facilitates events. What is some that has been held here?

We’ve had Endeavour, a non-profit organisation that supports high-impact entrepreneurs, hold their selection panel here; the launch of Design Society’s new journal; we’re having IDEO’s leadership retreat here, as well as a fashion event and a few other corporate events.