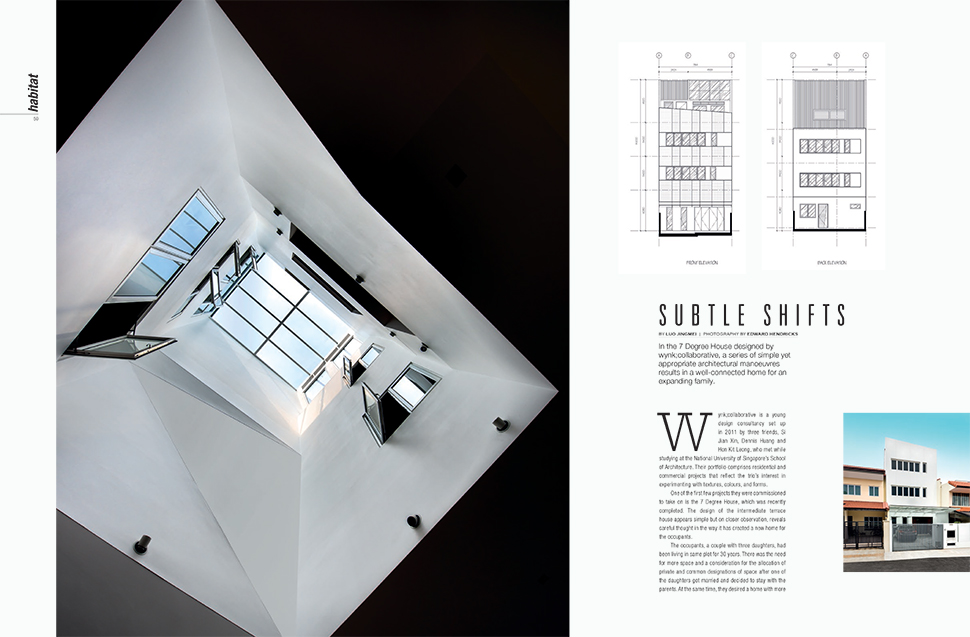 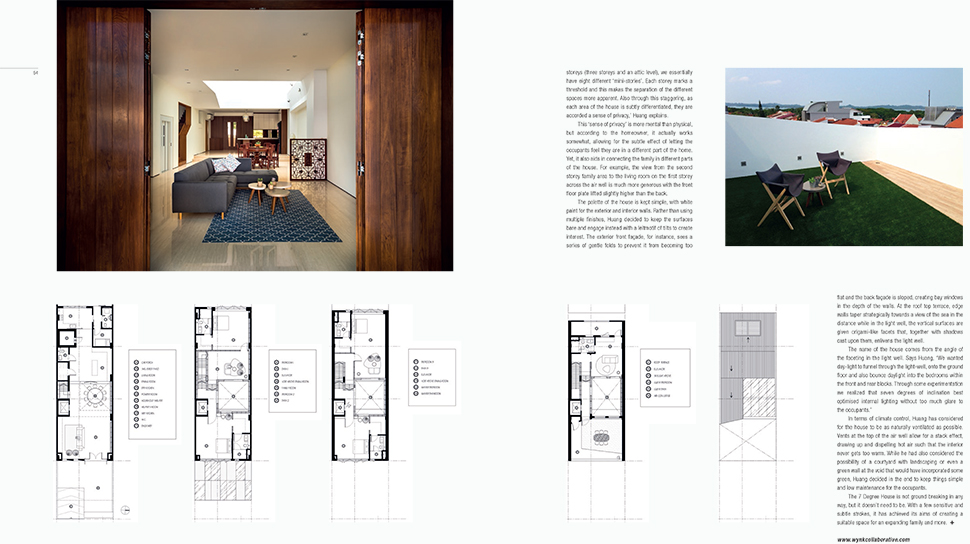 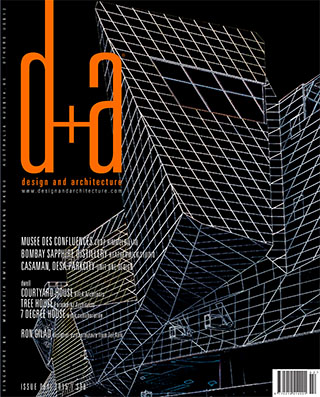 In the 7 Degree House designed by wynk;collaborative, a series of simple yet appropriate architectural manoeuvres results in a well-connected home for an expanding family.

Wynk:collaborative is a young design consultancy set up in 2011 by three friends, Si Jian Xin, Dennis Huang and Hon Kit Leong, who met while studying at the National University of Singapore’s School of Architecture. Their portfolio comprises residential and commercial projects that reflect the trio’s interest in experimenting with textures, colours, and forms.

One of the first few projects they were commissioned to take on is the 7 Degree House, which was recently completed. The design of the intermediate terrace house appears simple but on closer observation, reveals careful thought in way it has created a new home for the occupants.

The occupants – a couple with three daughters – had been living in same plot for 30 years. There was the need for more space and a consideration for the allocation of private and common designations of space after one of the daughters got married and decided to stay with the parents. At the same time, they desired a home with more natural illumination after experiencing a lack of sufficient lighting – a perennial issue with the inter-terrace house typology – in the previously two-storey house.

Rather than filling each floor plate with as many rooms as possible, wynk;collaborative cut a void though the middle of the house from the first storey to the attic, capped by a skylight. “The typical terrace house typology often translates to a long and deep plan with inward-looking spaces, enveloping itself in. Intentionally inverting this relationship, the 7 Degree House is conceived from the inside out with a cavernous light well punctured through its centre,” Huang emphasises. While this meant the house had to go higher in order to fit in the desired number of rooms, it also resulted in a light-filled house and, as designer Huang highlights, a more engaged way of living for the occupants.

Huang highlights “For a narrow plot the built-up actually feels bigger than it is [with this void]. We could have maximised the floor area of each level but the compromise would have been a claustrophobic feel, which we didn’t want. While it was an instinctive response to puncture some light though the middle, we actually found it also works for the social aspect that benefits the family as it grows. There’s still this sense of visual connection and you can always open a window and call downstairs.” He adds, “this light well is essential to give purpose to the entire house and the people who are living in it because it helps to bring them closer.” Additionally, with windows facing the air well from the rooms above, the occupants are always aware of the presence of other family members. Placing the dining room on the first storey right below the skylight also adds to this communal vibe. While the light well is not a new typology, here, it is applied to good effect.

Meanwhile, the staircase runs unobtrusively down the side of the house, while service spaces are tucked to the sides. This means that the spaces surrounding the triple-storey void can be freed up for usable spaces, which, on the second and third storey, translates to semi-private family areas for the different family members to retreat to.

Interestingly, Huang has defined the division of the programmes to the front and back of the house with split-levels, accessed by several steps. “Instead of four stories (three storeys and an attic level), we essentially have eight different ‘mini-stories’. Each storey marks a threshold and this makes the separation of the different spaces more apparent. Also through this staggering, as each area of the house is subtly differentiated, they are accorded a sense of privacy,” Huang explains.

This “sense of privacy” is more mental than physical, but according to the homeowner, it actually works somewhat, allowing for the subtle effect of letting the occupants feel they are in a different part of the home. Yet, it also aids in connecting the family in different parts of the house. For example, the view from the second storey family area to the living room on the first storey across the air well is much more generous with the front floor plate lifted slightly higher than the back.

The palette of the house is kept simple, with white paint for the exterior and interior walls. Rather than using multiple finishes, Huang decided to keep the surfaces bare and engage instead with a leitmotif of tilts to create interest. The exterior front façade, for instance, sees a series of gentle folds to prevent it from becoming too flat and the back façade is sloped, creating bay windows in the depth of the walls. At the roof top terrace, edge walls taper strategically towards a view of the sea in the distance while in the light well, the vertical surfaces are given origami-like facets that, together with shadows cast upon them, enlivens the light well.

The name of the house comes from the angle of the faceting in the light well. Says Huang, “We wanted day-light to funnel through the light-well, onto the ground floor and also bounce day-light into the bedrooms within the front and rear blocks. Through some experimentation we realized that seven degrees of inclination best optimised internal lighting without too much glare to the occupants.”

In terms of climate control, Huang has considered for the house to be as naturally ventilated as possible. Vents at the top of the air well allow for a stack effect, drawing up and dispelling hot air such that the interior never gets too warm. While he had also considered the possibility of a courtyard with landscaping or even a green wall at the void that would have incorporated some green, Huang decided in the end to keep things simple and low maintenance for the occupants.

The 7 Degree House is not ground breaking in any way, but it doesn’t need to be. With a few sensitive and subtle strokes, it has achieved its aims of creating a suitable space for an expanding family and more.