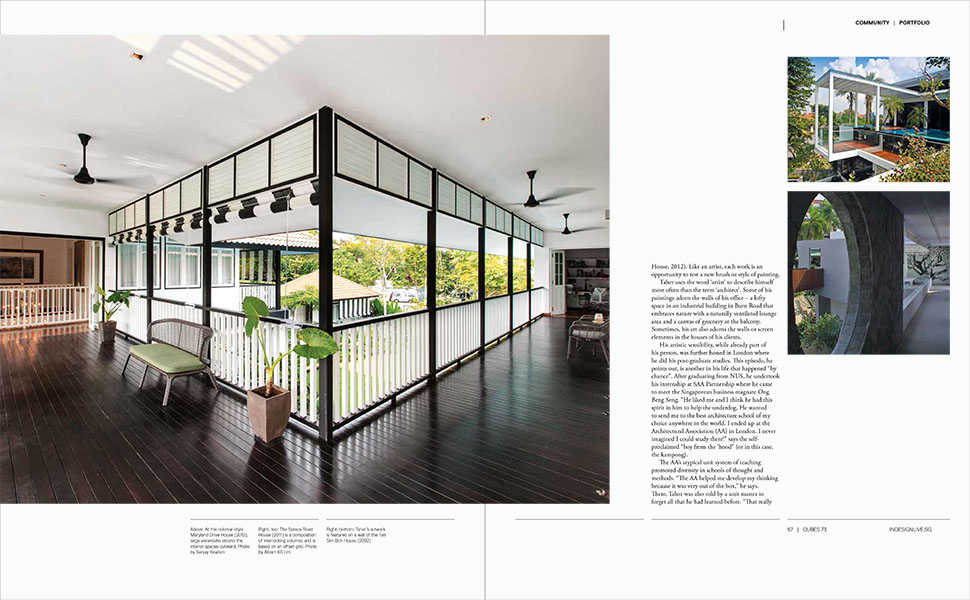 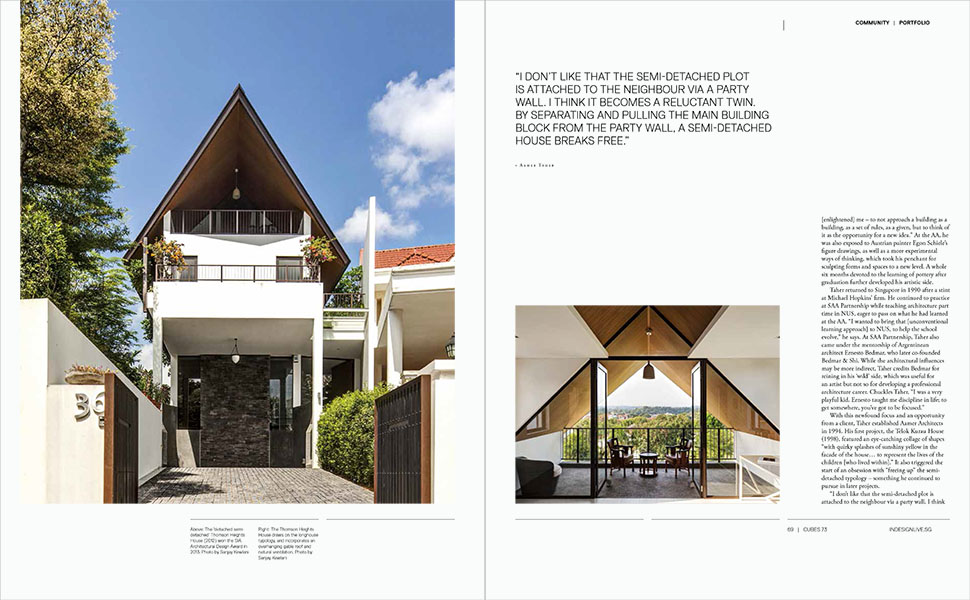 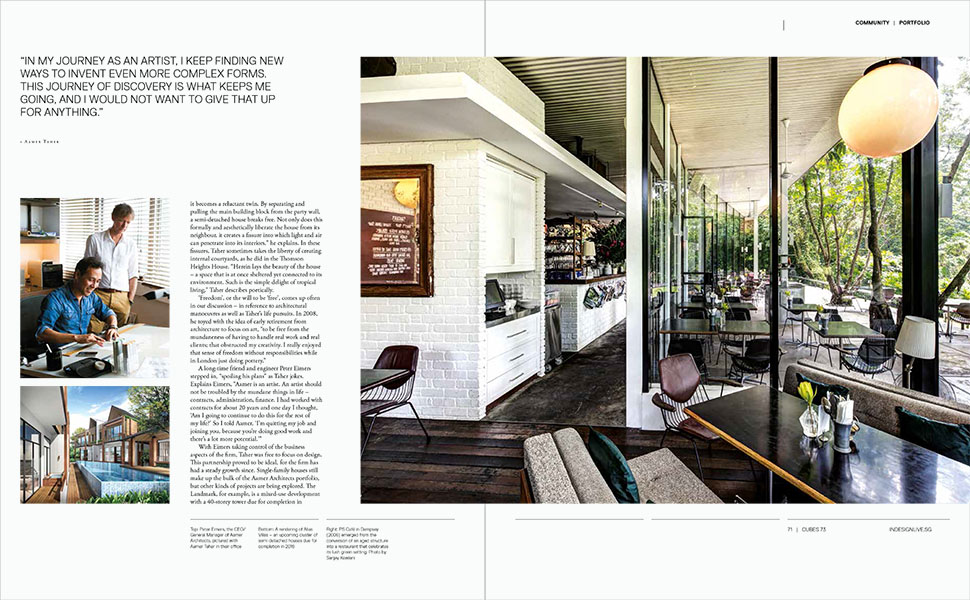 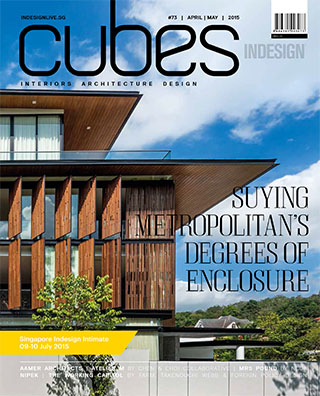 The Artist in the Architect

An artist’s hand and heart guides the creation of Aamer Taher’s tropical “archisculptures”.

Aamer Taher calls himself “the accidental architect”. While doing his national service, he came into the company of several friends who had applied to study architecture at the National University of Singapore (NUS). Taher had originally planned to study a more conventional course such as engineering or business. They said, ‘it’s quite fun, you should try to get in.” And so I did.” With his natural talent for drawing, he passed the aptitude test required for entry into the course. “So architecture came to me by chance. I did not plan the path of my life. And that’s why it has been so fun,” he laughs.

Those friends – Wong Chiu Man, Wong Mun Summ, Sim Boon Yang, Calvin Sim – are now accomplished architects and are among those who have led the contemporary architecture scene in Singapore for the last decade. Their firms (respectively, WOHA, WOW Architects and Eco.ID for Boon Yang and Calvin) have won multiple awards both locally and abroad.

Taher himself lies in this league. An award-winning architect, he is known for his sculptural, tropical architecture, designing mainly luxury single-family houses. Tropical, because they consider and engage intimately with the distinct climate of this region, mitigating the situations of sun, shade, rain and nature with elements like internal courtyards, verandas, deep overhangs and brise-soleil; sculptural, because their free-spirited spatial and tectonic expressions reflect Taher’s keen artistic sensibilities. His methodology is aptly and succinctly defined in the title of his 2011-released monograph ‘Sculpting Space in the Tropics’.

For example, in the Kheam Hock House (2002), spaces are interwoven with courtyards, which allow the “shifting nuances of nature” to engage with the everyday rituals of the occupants; floating glass pavilions wrapped in a vertical timber Balau screen also shield the interiors from the harsh, tropical sun in rhythmic fashion. The Dalvey Estate House (2009), inspired by the indigenous Iban longhouses in Sarawak, features a long timber-screened verandah that functions as both passageway and communal space, its elliptical shape juxtaposed with the rectilinear living room module like a piece of abstract art writhe large.

The uninhibited employment of fluid lines is a constant parti in Taher’s architecture. Sometimes, they feature as one or two formal elements, such as a staircase; other times, like in the Siglap Road House (2010), they take over the entire architecture, where bold, futuristic curves sweep and swirl to become floor, wall and roof, and extend beyond the interiors to function as balconies and overhangs for climate control. “That’s where the sculpting comes in – taking the values of a good tropical house but sculpting it into a new, unique form,” expounds Taher on a design language he has come to term “archisculpture…it’s from my artistic background. It’s from the love of pottery. It’s the love of the human form,” he attests. “We are not angular and straight. Nature is not angular and straight.”

When I ask Taher if this curvilinear language has become his signature style, he says in dismissal, “I’m not a stylistic architect; I take design as a chance to do something unique, of course taking into account clients’ preferences and functional requirements.” In other words, there is no copy-paste. A project might appear similar to another, but look closer and you will see new points of exploration. Case in point: the curves in the Siglap Road House were a simple exercise in folding planes; in the recently completed Guilin Golf-Clubhouse, they explore more three-dimensional architectural gymnastics.

The curve, he continues, is but one way to sculpt a piece of architecture. “I am quite good with straight lines too,” he says good-humouredly. “What I do not want to be is boring. So even if it’s a straight line, it has to be a straight line with some meaning, something that excites me and the narrative order, that has a unique experiential quality.” The Saraca Road House (2011), for instance, is what Taher terms a “cubic sculpture”. Inspired by Moshe Safdie’s iconic Habitat 67 apartment in Montreal, it is a cluster of interlocking boxes with resultant terraces, courtyards, balconies and planters that open up the rooms to the exterior.

The multifaceted expressions in Taher’s architecture simply reflect a curious mind at large. He tackles new forms, and also more traditional ones, such as the black-and-white colonial bungalow (The Maryland Drive House, 2012) and the pitched roof of the Malay kampong house, as in the Thomson Heights House (2012). Like an artist, each work is an opportunity to test a new brush or style of painting.

Taher uses the word “artist” to describe himself – more often than the term ‘architect’. Some of his paintings adorn the walls of his office – a lofty space in an industrial building in Burn Road that embraces nature with a naturally ventilated lounge area and a canvas of greenery at the balcony. Sometimes, his art also adorn the walls or screen elements in the houses of his clients as favours.

His artistic sensibility, while already part of his person, was further honed in London where he did his post-graduate studies. This episode, he points out, is another in his life that happened “by chance”. After graduating from NUS, he did his internship at SAA Partnership where he came into the good books of a client, the Singaporean tycoon Ong Beng Seng. “He liked me and I think he had this spirit in him to help the underdog. He realised I could do better than if I were in the local school and he wanted to send me to the best architecture school of my choice anywhere in the world. I ended up at the Architectural Association (AA) in London. I never imagined I could!” says the self-proclaimed “boy from the ‘hood” (or in this case, the kampong). The way Taher’s life has panned out, it appears, is just like the trajectory of the curves in his architecture – unpredictable, unplanned, but which makes for interesting stories.

AA’s atypical unit system of teaching promoted diversity in architecture schools of thought and methods. “The AA helped me develop my thinking because it was very out of the box,” he says. There, Taher was also told by a unit master to forget all that he had learned before. “That really [enlightened] me – to not approach a building as a building, as a set of rules, as a given, but to think of it as the opportunity for a new idea.” At the AA, he was also exposed to Austrian painter Egon Schiele’s figure drawings, as well as a more experimental ways of thinking, which took his penchant for sculpting forms and spaces to a new level. A whole six months devoted to the learning of pottery post-graduation further developed his artistic side.

Taher returned to Singapore in 1990 after a stint at Michael Hopkin’s firm. He continued to practice in SAA Partnership while teaching architecture part time in NUS, eager to pass on what he had learned at the AA. “I wanted to bring that [unconventional learning] to NUS, to help the school evolve,” he says. Some beneficiaries include the quartet of directors from acclaimed architecture firm Formwerkz. It is not surprising then that many of their work incorporate Taher’s openness for experimentation and greenery.

At SAA Partnership, Taher also came under the mentorship of Argentinean architect Ernesto Bedmar, who later founded Bedmar & Shi. While the architectural influences may be more indirect, Taher credits Bedmar for reining in his ‘wild’ side, which was useful for an artist but not so for developing a career. Chuckles Taher, “I was a very playful kid. Ernesto taught me discipline in life; to get somewhere, you got to be focused.”

With this newfound focus, given an opportunity by a client, Taher established his own firm Aamer Architects in 1994. His first project, the Telok Kurau House (1998) featured an eye-catching collage of shapes “with quirky splashes of sunshiny yellow in the façade of the house…to represent the lives of the children [who live within].” It also triggered the start of an obsession with “freeing up” the semi-detached typology – something he continued to do in later projects.

“I don’t like that the semi-detached plot is attached to the neighbour via a party wall. I think it becomes a reluctant twin. By separating and pulling the main building block from the party wall, a semi-detached house breaks free. Not only does this formally and aesthetically liberate the house from its neighbour, it creates a 3-metre fissure into which light and air penetrate into its interiors,” he explains. In these “fissures”, Taher sometimes takes the liberty to create internal courtyards, such as in the Thomson Heights House. “Herein lays the beauty of the house – a space which is at once sheltered yet connected to its environment. Such is the simple delight of tropical living,” Taher describes poetically.

‘Freedom’ or to be ‘free’ comes up often in the interview – in describing architectural manoeuvres, as well as Taher’s life pursuits. In 2008, he toyed with the idea of early retirement from architecture to focus on art, “to be free from the mundaneness of having to handle real work and real clients; that obstructed my creativity. I really enjoyed that sense of freedom without responsibilities while in London just doing pottery.”

A long-time friend and engineer Peter Eimers stepped in, “spoiling his plans”, Taher jokes. “Aamer is an artist. An artist should not be troubled by the mundane things in life – contracts, administration, finance. I had worked with contracts for about 20 years and one day I thought ‘am I going to continue this for the rest of my life?’ so I told Aamer ‘I’m quitting my job and joining you, because you’re doing good work and there’s a lot more potential.”

With Eimers taking control of the business aspects of the firm, Taher was free to just focus on design. This partnership proved to be ideal, for the firm has had a steady growth since. Single-family houses still make up the bulk of the firm’s portfolio but it is also starting to venture into new kinds of projects. This includes The Landmark, a mixed-use development with a 40-storey tower in Penang due for completion this year; a group of strata-titled semi-detached houses in Singapore (Alias Villas) under construction; and the aforementioned golf-clubhouse in Guilin, China. (The overseas projects are done in partnership with the KL-based AA-GAS that Taher set up with Wu Eng Loong whom he met from his London days, and WACA Design, established with Wu and Chen Fei, which takes care of the China projects from its Shenzhen base). This growth is organic, but not undesired. They allow Taher to test his preoccupations onto larger scales and more complex programs.

But what remains constant is Taher’s yearning to achieve a sense of beauty in his work. “We are very conscious that our buildings have to be beautiful. They have to cross into the realm of art beyond fulfilling the functions of a building. So we try different forms, different ways of doing things…architecture is art and craft. The craft part we keep refining, so now we know how to do more complex forms because we have the experience, but the art side is a very inward, soulful discovery I would way in my journey as an artist, I keep finding new ways to reinvent even more complex forms. This journey of discovery is what keeps me going and I would not want to give that up for anything.”