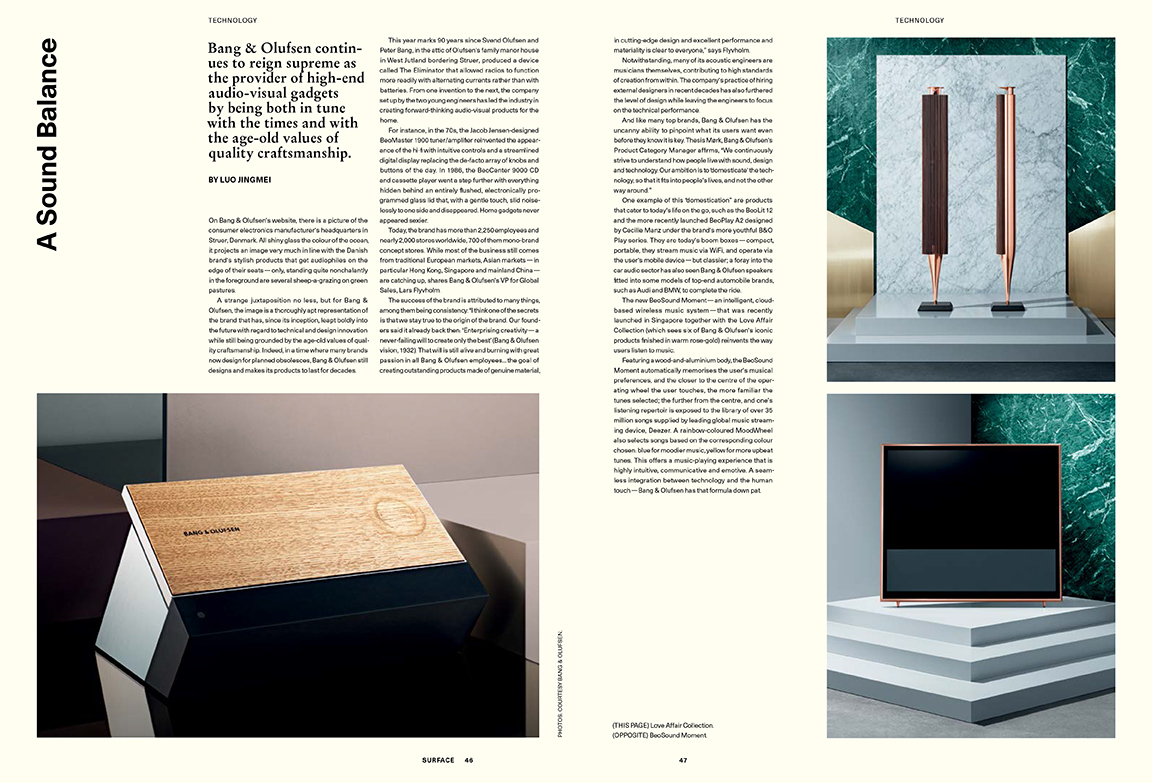 Bang & Olufsen continues to reign supreme as the provider of high-end audio-visual gadgets by being both in tune with the times and with the age-old values of quality craftsmanship.

On Bang & Olufsen’s website, there is a picture of the consumer electronics manufacturer’s headquarters in Struer, Denmark. All shiny glass the colour of the ocean, it projects an image very much in line with the Danish brand’s stylish products that get audiophiles on the edge of their seats—only, standing quite nonchalantly in the foreground are several sheep-a-grazing on green pastures.

A strange juxtaposition no less, but for Bang & Olufsen, the image is a thoroughly apt representation of the brand that has, since its inception, leapt boldly into the future with regard to technical and design innovation while still being grounded by the age-old values of quality craftsmanship. Indeed, in a time where many brands now design for planned obsolesces, Bang & Olufsen still designs and makes its products to last for decades.

This year marks 90 years since Svend Olufsen and Peter bang, in the attic of Olufsen’s family manor house in West Jutland bordering Struer, produced a device called The Eliminator that allowed radios to function more readily with alternating currents rather than with batteries. From one invention to the next, the company set up by the two young engineers has led the industry in creating forward-thinking audio-visual products for the home.

For instance, in the 70s, the Jacob Jensen-designed BeoMaster 1900 tuner/amplifier reinvented the appearance of the hi-fi with intuitive controls and a streamlined digital display replacing the de-facto array of knobs and buttons of the day. In 1986, the BeoCenter 9000 CD and cassette player went a step further with everything hidden behind an entirely flushed, electronically programmed glass lid that, with a gentle touch, slid noiselessly to one side and disappeared. Home gadgets never appeared sexier.

The success of the brand is attributed to many things, among them being consistency. “I think one of the secrets is that we stay true to the origin of the brand. Our founders said it already back then: ‘Enterprising creativity—a never-failing will to create only the best’ (Bang & Olufsen vision, 1932). That will is still alive and burning with great passion in all Bang & Olufsen employees…the goal of creating outstanding products made of genuine material, in cutting-edge design and excellent performance and materiality is clear to everyone,” says Flyvholm.

Notwithstanding, many of its acoustic engineers are musicians themselves, contributing to high standards of creation from within. The company’s practice of hiring external designers in recent decades has also furthered the level of design while leaving the engineers to focus on the technical performance.

And like many top brands, Bang & Olufsen’s ability to pinpoint what its users want even before they know it is key. Thesis Mørk, Bang & Olufsen’s Product Category Manager affirms, “we continuously strive to understand how people live with sound, design and technology. Our ambition is to ‘domesticate’ the technology, so that it fits into people’s lives, and not the other way around.”

One example of this ‘domestication’ are products that cater to today’s life on the go, such as the BeoLit 12 and the more recently launched BeoPlay A2 designed by Cecilie Manz under the brand’s more youthful B&O Play series. They are today’s boom boxes—compact, portable, stream music via wifi, and operated via the user’s mobile device—but classier; a foray into the car audio sector has also seen Bang & Olufsen speakers fitted into some models of top-end automobile brands, such as Audi and BMW, to complete the ride.

Featuring a wood-and-aluminium body, the BeoSound Moment automatically memorises the user’s musical preferences and the closer to the centre of the operating wheel the user touches, the more familiar the tunes selected; the further from the centre, and one’s listening repertoir is exposed to the library of over 35 million songs suppplied by leading global music streaming device Deezer. A rainbow-coloured MoodWheel also selects songs based on the corresponding colour chosen: blue for moodier music, yellow for more upbeat tunes. This offers a music-playing experinece that is highly intuitive, communicative and emotive. A seamless integration between technology and the human touch—Bang & Olufsen has that formula down pat.