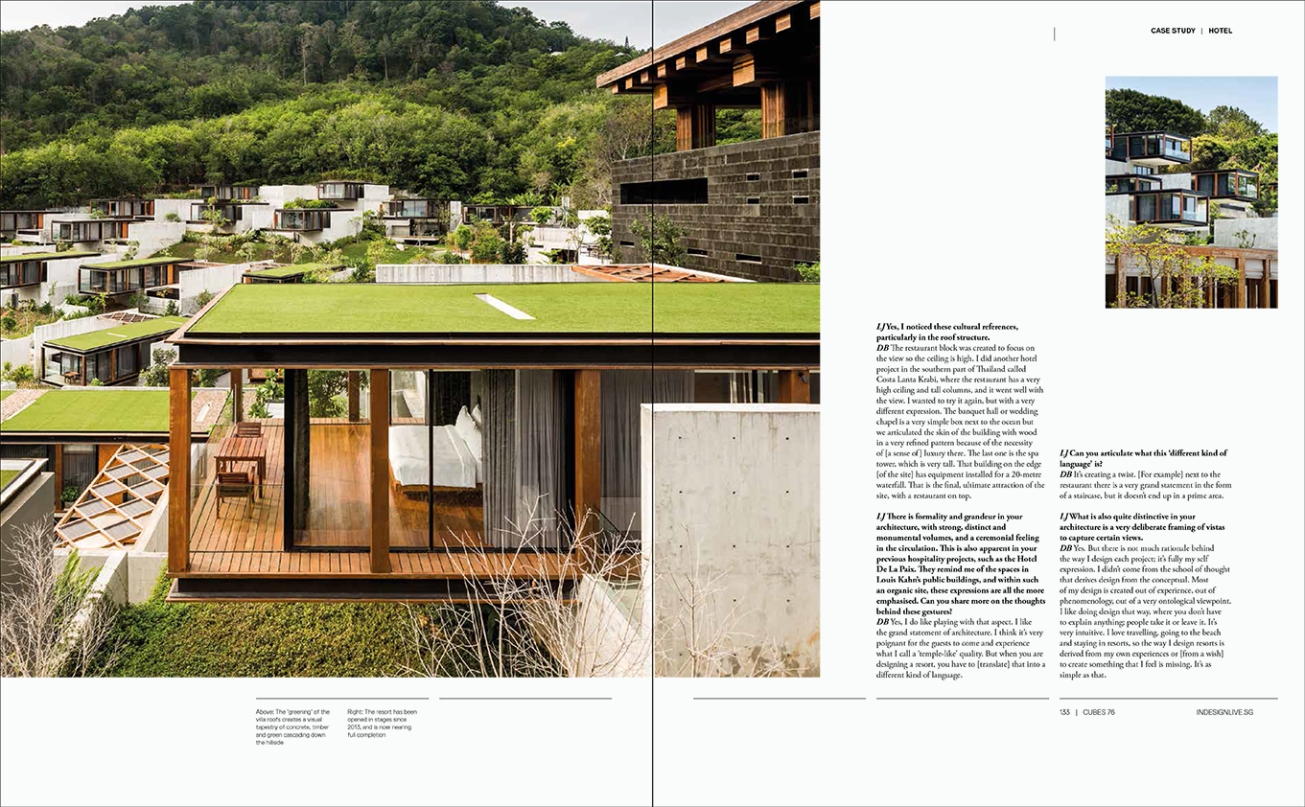 Room with a View

Some define Duangrit Bunnag’s architecture as minimalist. But that would be too elementary a description. Alongside a brevity of expression that lends a calm to his architecture, the Thai architect’s works also contain well-orchestrated spatial nuances, a tactility in the use of natural materials, and an adept mastery of the site, as can be seen in a most recent project, The Naka Phuket.

The Naka Phuket is finally near full completion stage since opening in parts since 2013. It comprises 94 pool villas nestled snugly into the hilly landscape facing a private beach, with common facilities spread throughout the site to encourage guests to connect intimately with nature. In keeping with this agenda, Bunnag was careful to keep as many of the existing trees as possible. Most prominently, the villas cantilever over the slopes, projecting towards the azure waters of the picturesque Phang Nga bay. These are articulated as clean-cut, glass boxes, capped by grass or pebbles such that from the villas higher up on the hills, the view is a matrix of green, stone, steel, concrete and timber – all naturally expressed in their original rawness.

“The keyword ‘authentic’ applies to everything [in the resort], including the materials,” says Bunnag. On the architectonics, he says, “Euclidean forms always lead the way for my architecture.” Simplicity also features in the layout of the villas’ interiors, where a straightforward progression – bedroom at the front, living room in the middle, and a rear bathroom that opens to a private pool – and neutral palette puts the focus on the indoor-outdoor relationship. This allows for a resort experience that, while on the inside, is “simplistically calm and comforting”, offers exhilaration and wonder in other aspects. From his office in Bangkok, Bunnag shares with his thoughts behind the design of The Naka Phuket.

Can you share with us the client’s brief for the resort’s design?
Duangrit Bunnag (DB): The client didn’t give me a specific brief; only he was keen to have most of the hotel [rooms] as villas. The architecture is derived from the site condition, which is the mountain looking to the ocean. Since the hotel is in the mountains, I told [the client] that I had a wish to design bedrooms that cantilever from the mountainside, hanging in the air. He liked the idea.

Where did this inspiration for the cantilevering bedrooms come from? Was it something you experienced somewhere?

DB: It was an image I saw from the past – a picture of a house hanging on the edge of the mountain and looking over to the view in front. In Thailand we don’t have that kind of situation very much so I think this is a good opportunity and it’s the perfect reason to do that. With the bedroom hanging in the air surrounded by all the glass windows, you feel submerged into the view of the ocean. I like that idea.

I think the project you are referring to is Pierre Koenig’s Case Study House #22 or the Stahl House, with the famous image by photographer Julius Shulman that overlooks the twinkling lights of Los Angeles.

DB: Yup. I am always inspired by this kind of modernist architecture in the 60s and 70s.

Let’s talk about the public programs – the reception area, the block with the Nava restaurant and Nana bar, the wedding chapel, and the spa tower. You have spread them throughout the site rather than cluster them together, and they are all expressed as singular objects.

DB: Right, indeed. The idea is to make the attraction of the site like a temple, or the Acropolis, where you’re standing on one point and you want to have a view to other things; you have something to rest your eye upon. The major buildings are all key visual points. They were separated for that purpose.

Can you elaborate on the architecture of each of these different spaces?

DB: For the reception area, I was [initially] inspired by South African architecture but then it got mixed up with a little bit of Thai and Japanese and Chinese architecture so in the end it didn’t quite turn out to be anything [obvious]! (Laughs) I like that because I want the guests to arrive at a space that is a bit eclectic and a bit historical but they can’t tell whether it’s related to any place in time.

Yes, I noticed these cultural references, particularly in the roof structure.

DB: The restaurant block was created to focus on the view so the ceiling is high. I did another hotel project in Southern part of Thailand before called Costa Lanta Krabi where the restaurant structure has a very high ceiling, and very tall columns, and it went well with the view. I wanted to try it again, but with a very different expression.

The banquet hall or wedding chapel is a very simple box next to the ocean but we articulated the skin of the building with wood in a very refined pattern because of the necessity of [a sense of] luxury for the banquet hall. It is a screen that looks a little bit fashionable.

The last one is the spa tower, which is very tall. That building on the edge [of the site] is installed with the equipment to install a 20-metre waterfall. That is the final, ultimate attraction of the site, with a restaurant on top.

There is a kind of formality and grandeur in your architecture, with strong, distinct and monumental volumes, and a ceremonial feeling in the circulation. These are apparent as well in your previous hospitality projects, such as the Hotel De La Paix. They remind me of the spaces in Louis Kahn’s public buildings, and within such an organic site, these expressions are all the more emphasised. Can you share more on the thoughts behind these gestures?

DB: Yah, I do like playing with that aspect. I like the grand statement of architecture. I think it’s very [poignant] for the guests to come and experience what I call it a ‘temple-like’ quality. But when you are designing a resort, you have to [translate] that into a different kind of language, which is what I did.

Can you articulate what is this ‘different kind of language’?

DB: It’s creating a twist. [For example] next to the restaurant there is a very grand statement of a staircase, but it doesn’t end up in a prime area.

Also what is quite distinctive of your architecture is a very deliberate framing of vistas to capture certain views.

DB: Yes. But I think there is not much of rationale behind the way I design each project; it’s fully my self expression. I didn’t come from the school of thought that derived at design from the conceptual. Most of my design is created out of experience, out of phenomenology, out of a very ontological viewpoint. I like doing design that way, where you don’t have to explain anything; you just leave it there and people take it or leave it. (Laughs) It’s very intuitive. I love travelling and I love going to the beach and I love staying in resorts so the way I design resorts is derived from my own experiences or to create something that I feel is missing. It’s as simple as that.

Were there any tenets of traditional Thai design in The Naka? I think that came out a bit in the reception pavilion’s architecture, albeit unintentionally.
DB: The way I implement the Thai idea to [The Naka] is very subliminal, and I think it should be that way. I think many resorts try to actually implement [traditional] Thai vocabulary as visual [references but] there is no fundamental grounding to that because that is a thing of the past. And in order to recreate it, at a certain point you’re faking it. I don’t want to fake my architecture; I want everything to be authentic. I think the key word is authentic. So as it is an architecture created in the 21st century we just create it that way. But I think the subliminal of Thai-ness will be within. I can’t tell directly where it is or how it was done but it’s in me. I’m a Thai architect. I’ve been living in Thailand for most of my life. Eventually it comes out [in my design].

Would one aspect of this ‘Thai-ness’ be the ‘tropical feel’ of the resort with the abundant use of wood, for instance?

DB: Yes, I use a lot of natural materials here. But another thing that I can recall right now is the expressiveness and the challenging of the level of privacy [in the architecture]. I think that’s very Thai in a way. For instance, in taking a shower in the outdoors. It’s a matter of fun.

Lastly, can you share with us what’s DBALP currently busy with?

DB: I moved my office to a place I call The Jam Factory. It’s a renovated warehouse by the riverside. I’ve been busy with that, enjoying myself, creating several events and extensions to the building. I’m also enjoying doing many restaurants for myself now, [which means] I’m actually doing more interior projects. For architecture, we’re working on a restaurant complex in the eastern part of Thailand in Pattaya, as well as many houses that you might be able to see completed next year.