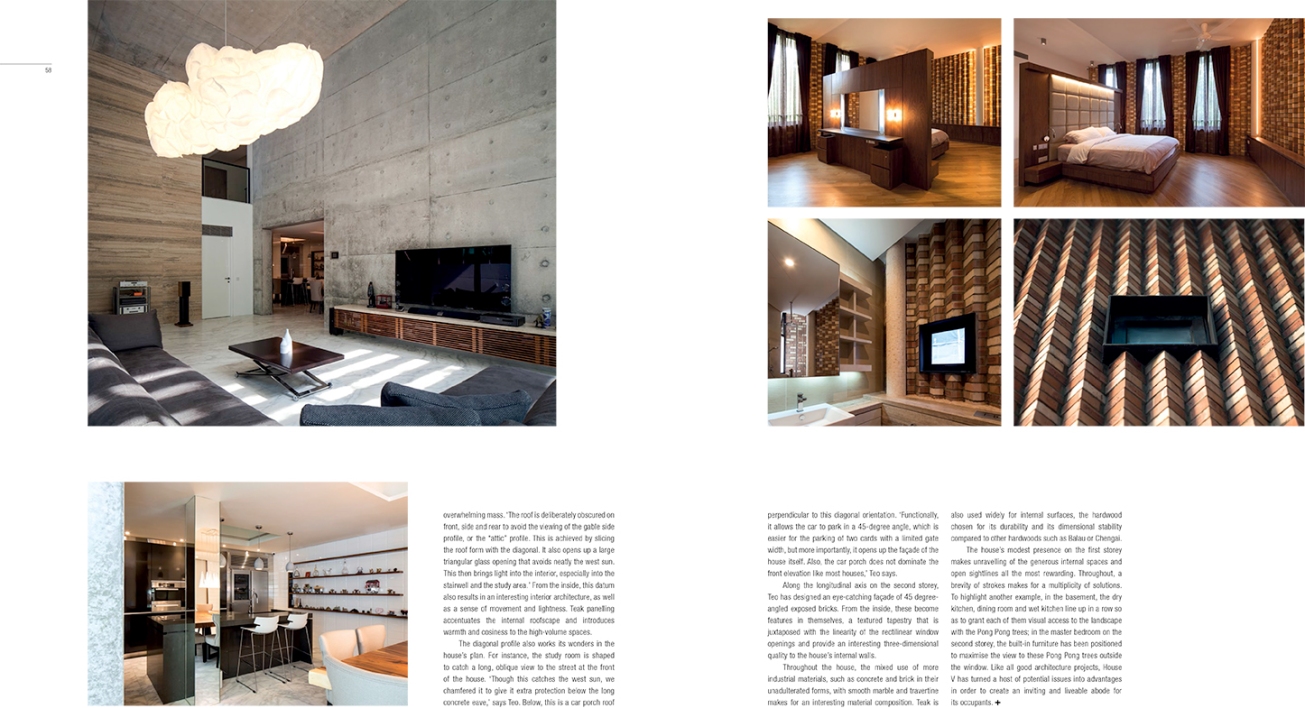 In House V, Red Bean Architects introduces a series of architectural manoeuvres to turn an originally dark and disconnected house into one that is airy and engaging.

Red Bean Architects was set up by architect Teo Yee Chin in 2009 as a means to make personal investigations into architecture and urbanism. Prior to that, he was an associate at Architects 61, honing his skills on large-scale projects such as the Ocean Financial Centre and the People’s Association Headquarters. Also an educator, he takes a keen interest in pondering on human-centred design.

Under Red Bean Architects, he has completed a number of commercial and residential projects. The latter provides an avenue for him to explore ideas about form and material on a domestic scale. One recently completed project is House V. Teo’s reconstruction to the existing structure has resulted in a vastly different – and more delightful – architecture.

The original house featured a number of challenges. Firstly, the land the house is situated on land that drops a whole storey in mid section. One entered the first storey in the former layout to a bunch of bedrooms and the living room, which is segregated from the kitchen and dining room located in the basement level. At 10.5 metres, the house was also extra wide for a semi-detached house; it did not help that being a semi-detached house, it only has three facades. The result was a burrow of dark and uninviting internal spaces.

Visiting the site, Teo spotted a gem in the form of a patch of public green to the back of the site between the house and a main road. “There was also this green area with well-developed Pong Pong trees. I wanted the owners to get to that view upon entering the house from the first storey,” he shares. To do this, he cut a large void in the first storey floor slab to create a double-volume space in the basement where he placed the living room alongside the dining room and kitchen. Glass windows all around this space opens to the view of the lush trees, while opposite the entrance foyer an opening in the wall allows for that thorough view to the lush landscape beyond upon entry. There is also a ceremonial feel created when one is privy to the view of the lofty living room below before walking down the stairs to the now well-connected common spaces.

Above, the private spaces are placed around this double-storey common space. “The long spans of the living room discouraged the addition of walls above. Much of the structure was concentrated nearer the party wall. So this pushed us towards the opening up of the roof above the living room area,” Teo explains. “However, over and above structural considerations, the roof configuration helped to brighten the house interior and allow long penetrating views through.”

In what remained of the first storey after part of the floor slab has been cut to create the void above the living room, Teo has fit in a decently sized entertainment room, guestroom and patio overlooking a pond at the entrance. The latter is one of the few “in-between” spaces in the house that brings the external environment in. “I think the feeling of the quality in this space is important. Also, because the house is so deep, we wanted access to natural light from all corners of the house,” Teo explains.
This notion of transparency is key in addressing the deep plan. Another solution is the puncturing of double- or triple-storey light wells throughout the house. These are found in the main stair core, at the basement dry kitchen and also in the master bathroom. They are discreet elements but essential in providing the feeling of airiness – and also the theme of connectivity – throughout the property.

The house’s form is another paramount investigation for Teo. Standing at the first storey entrance, the house’s key datum takes the form of a visually strong V shape – hence the house’s moniker. It starts from the first storey car porch eave, continues upwards at a diagonal angle, and ends at the tip of the pitched roof. “You can see how the roof disappears towards the rear, which also keeps the façade to a three-storey one,” Teo says, highlighting the architecture’s effort against the creation of an overwhelming mass. “The roof is deliberately obscured on front, side and rear to avoid the viewing of the gable side profile, or the ‘attic’ profile. This is achieved by slicing the roof form with the diagonal. It also opens up a large triangular glass opening that avoids neatly the west sun. This then brings light into the interior, especially into the stairwell and the study area.” From the inside, this datum also results in an interesting interior architecture, as well as a sense of movement and lightness. Teak panelling accentuates the internal roofscape and introduces warmth and cosiness to the high-volume spaces.

The diagonal profile also works its wonders in the house’s plan. For instance, the study room is shaped to catch a long, oblique view to the street at the front of the house. “Though this catches the west sun, we chamfered it to give it extra protection below the long concrete eave,” says Teo. Below, this is a car porch roof perpendicular to this diagonal orientation. “Functionally, it allows the car to park in a 45-degree angle, which is easier for the parking of two cards with a limited gate width, but more importantly, it opens up the façade of the house itself. Also, the car porch does not dominate the front elevation like most houses,” Teo says.

Along the longitudinal axis on the second storey, Teo has designed an eye-catching façade of 45 degree-angled exposed bricks. From the inside, these become features in themselves, a textured tapestry that is juxtaposed with the linearity of the rectilinear window openings and provide an interesting three-dimensional quality to the house’s internal walls.

Throughout the house, the mixed use of more industrial materials, such as concrete and brick in their unadulterated forms, with smooth marble and travertine makes for an interesting material composition. Teak is also used widely for internal surfaces, the hardwood chosen for its durability and its dimensional stability compared to other hardwoods such as Balau or Chengai.

The house’s modest presence on the first storey makes unravelling of the generous internal spaces and open sightlines all the most rewarding. Throughout, a brevity of strokes makes for a multiplicity of solutions. To highlight another example, in the basement, the dry kitchen, dining room and wet kitchen line up in a row so as to grant access to the landscape with the Pong Pong trees; in the master bedroom on the second storey, the built-in furniture has been positioned to maximise the view to these Pong Pong trees outside the window. Like all good architecture projects, House V has turned a host of potential issues into advantages in order to create an inviting and liveable abode for its occupants.